On several occasions over the years I’ve interviewed June Lockhart – the TV matriarch in shows such as “Lassie” and “Lost in Space” – who turns 94 this year on June 25. Obviously, her parents christened her, but was it simply a matter of being named after the month of her birth?

Well, sort of, was her answer – there’s more to the story. The month played a reoccurring role in the early lives of her parents Gene and Kathleen Lockhart, who were also actors. Thomas Edison was involved, too!

“Edison had a cross-country train tour every year to showcase his latest inventions,” June explained from her Santa Monica home during one of our interviews. “(He) knew how to promote his new inventions by taking his product to the dealers.”

As his train traveled across the country, the inventor would also entertain the dealers in large cities by presenting his own theatrical productions. 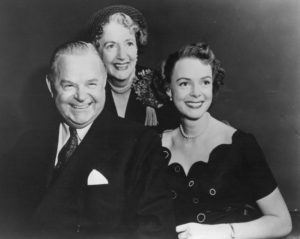 “My father was in one of the plays in 1922 and again the following year when my mother was hired in June,” said Lockhart. “Edison introduced my parents to each other in his office in West Orange, NJ, before rehearsals got underway.”

That year, Edison and his troupe traveled from New York to Chicago and St. Louis then worked their way across the southern half of the United States, and finally up the Pacific coast to Banff, Canada, where the tour ended. That’s when, says Lockhart, “daddy made his move!”

“I was born the following year, also in June,” said Lockhart. “They were expecting a boy who was to be named Gene Jr., so my being a girl was quite a surprise. My birth certificate reads ‘Female Lockhart!’ They later chose June as my name because it was a significant month in their lives.”

Nick Thomas teaches at Auburn University at Montgomery, Alabama, and has written features, columns, and interviews for over 700 magazines and newspapers.  See www.getnickt.org