The Insurance Institute for Highway Safety (IIHS) released new research recently revealing distracted driving continues to increase – mostly due to smartphone use and other behaviors.

According to the study, manipulating a cellphone (texting, reading, dialing, etc.) was a contributing factor in more than 800 crash fatalities on U.S. roads during 2017. Local personal injury attorney Loyd J. Bourgeois agrees saying he “sees it every day in his commute and in his practice.”

Distracted driving, especially smartphone use, continues to raise concerns. According to a 2018 national survey by the AAA Foundation for Traffic Safety, over 60 percent of respondents agreed distracted driving is a big concern, even more so than just three years ago.

While smartphone use while behind the wheel is the most talked about culprit of distracted driving, other non-phone related behaviors are a greater problem. In fact, the study found that 14 percent of motorists were distracted by these non-phone related distractions, far exceeding the 3.4 percent observed manipulating a phone.

The 2018 IIHS survey observed drivers during the morning, afternoon and evening on weekdays. Overall, the survey reported 23 percent of motorists were engaged in one or more distracting activities while both moving and stopped at red lights: 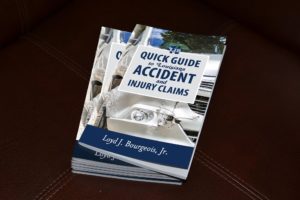 Bourgeois, who has a free resource guide for drivers titled “The Quick Guide to Louisiana Accident and Injury Claims” available at www.QuickInjuryGuide.com, said he notices distracted drivers frequently “on Highway 90, Paul Maillard, and I-310, especially in the stop and go traffic of the evening commute – people looking down at the phone, causing delays at red lights, and causing collisions.”  From his office on River Road near I-310, he sees “traffic backed up just about every afternoon to Paul Maillard, and a high percentage of drivers are looking down at their phone when they pass us going towards the interstate. Do they eventually put it down when traffic starts flowing? Who knows.”  He noted, “in our practice, asking about distracted driving and researching if other drivers were distracted during collisions is front and center in most injury and accident cases – even with commercial truck drivers.”

With major highways in St. Charles Parish appearing on recent Most Dangerous Highways In America lists and given the increased traffic on our roadways due to various major construction projects in the area, all drivers are reminded to avoid all distractions, whether by smartphone or other secondary behaviors, while driving.

The 2018 IIHS study information can be found at: https://www.iihs.org/iihs/news/desktopnews/distracted-driving-cellphone-manipulations-up-57-percent-over-prior-survey.