The Hahnville Lady Tigers went almost a decade without a soccer playoff victory to its name, a drought made even tougher after a heart-wrenching opening round loss at home last season.

But things can change quickly. A little over a year later, Hahnville’s not only ended the drought, but they’re on a playoff winning streak – and off to the state quarterfinals.

The No. 19 seeded Tigers upset No. 3 Captain Shreve 2-0 Tuesday night at Tiger Stadium in the second round of the Division I playoffs, scoring a goal in each half and building upon its dramatic 5-4 opening round victory at No. 13 Thibodaux.

Hahnville (8-8-2) handed Captain Shreve (24-2-1) just its second loss this season, and now advances to face the winner of No. 6 Mandeville and No. 22 Walker in the quarterfinals.

It was also only the second time this season Captain Shreve has allowed more than a single goal in a game.

“I’m just so proud of us … it doesn’t feel real,” said Hahnville’s Kayla Martin, who gave the Tigers a 2-0 lead with her goal midway through the second half. “We finally decided to come out and play together as a team.”

Hahnville’s last playoff win prior to 2021 was in 2012, a victory over Natchitoches Central.

Amber Hood scored the first goal of the day, approximately 20 minutes into the first half to put Hahnville ahead.

The senior said making it to this point has special meaning for her, as she knows success can’t be taken for granted.

“My freshman year, we weren’t in the playoffs at all, so to win in round two and continue on is pretty great,” Hood said. “We’ve all been talking as a team and motivating each other, telling one another this wouldn’t be our last game. We’ve been playing together our whole lives, so we really connect out there and we just had confidence.”

The Tigers controlled the ball for much of the match and kept the Gators from operating at length in Hahnville territory.

Hood’s first half goal allowed Hahnville to play with a lead and tighten its control of the action. But when Martin got loose and booted one into the net to make it a two goal lead, the Tigers could see the finish line and made it difficult for Shreve to generate many clean looks.

The win likely exorcised the memory of the team’s 3-2 overtime loss at home to Barbe last season, as the Tigers have held off rallies in each of the past two games.

Eric DeSoto, who the reins of the program in January after former head coach Alex Romero resigned last month, said the Tigers came in with a clear gameplan and that the players executed tremendously. 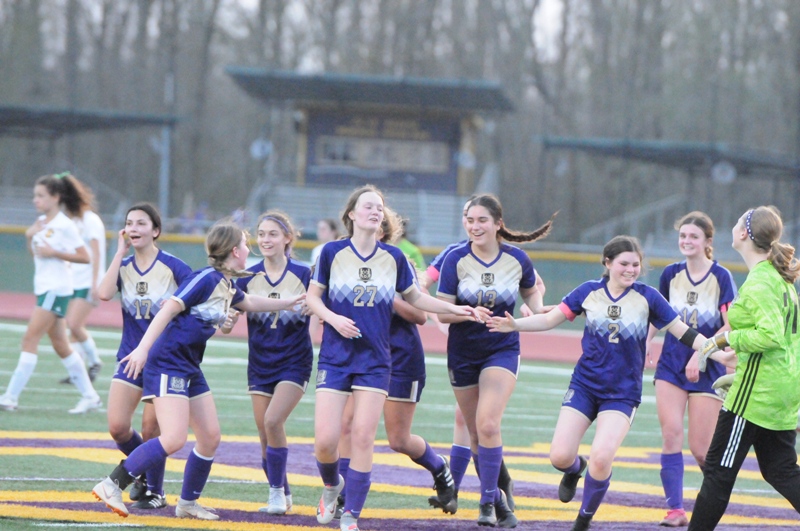 “We had some video of Captain Shreve … we knew they’d give a lot of space in the midfield, which would allow us to possess the ball and go after them … let our strikers go to work from there,” said DeSoto, a Tigers alumnus. “We put two in the back of the net and held from there.

“The last win was the first playoff win for us in a really long time.  It’s pretty significant. We knew we were better than a 19 seed. We had a tough go throughout the season.”

The Tigers played a brutal schedule this season to prepare for a late season playoff run, and what it didn’t yield in regular season wins, it appears to be paying tenfold in the postseason.

“Coach Kim (Porche, Tigers assistant) had a funny observation last week … she said most teams peak before the season ends. We’re here peaking in the playoffs. And what better time to have our best games?” DeSoto said.

Martin said there were stretches that weren’t always easy this season, but added the team learned from them. Hahnville had a four match losing streak in December that represented a low point, but the Tigers have roared back since.

“At times, we weren’t on the same page, but now we’re talking more, being more positive,” she said. “We’re good at connecting, good at passing to one another. We know how to play together.”

Added Hood, “We were losing confidence during that streak. We built it back up. I think it shows out there now.”

HAHNVILLE 5, THIBODAUX 4 – District rivals went head to head in round one after tying during a regular season battle, and this was another thriller.

The Tigers got goals from Mackenzie Dufrene, Korynne Caufield, Kayla Martin, Ava Fontenot and Ashlyn Hooper in the 5-4 road victory.

HHS led 5-3 in the match before Thibodaux pulled within a goal with about 10 minutes left to play, but Hahnville sealed the win from there.

School may be out for summer, but the St. Charles Parish Sheriff’s Office has a clear message for juveniles and their parents – the parish curfew is enforced year-round. […]