Hahnville jumped out to an early lead and rode a momentum wave to a 64-39 victory over rival Destrehan Tuesday night in District 7-5A competition.

Hahnville led 19-9 after the first quarter and continued to push the lead forward from there, taking a 33-18 lead into the halftime break and then a 25-point lead into the fourth quarter.

Simmons set the tone for her team, the senior guard scoring eight of the Tigers’ 19 first quarter points. Meanwhile, Ah’Jaia Kenner made a big impact after checking into the game early on for Hahnville, scoring four in the first and making her presence known at the defensive end.

“(Kenner) was all over the court,” said Hahnville head coach Arrianna Smith. “She played really aggressive on defense. At the end of the day, this is a rivalry game, and everyone wants to win, everyone wants to contribute as much as possible.”

Ursin converted a layup off of a steal for Destrehan to make it 19-11 early in the second quarter. Richard followed up with another score in transition, and Hahnville’s lead was down to six. A chance to cut the lead to three didn’t materialize when an Ursin 3 rimmed out – Hahnville’s Reagan Harrold sank two from the line at the other end, and Dihlynn Mitchell’s floater after a Tigers steal pushed it back to 10. 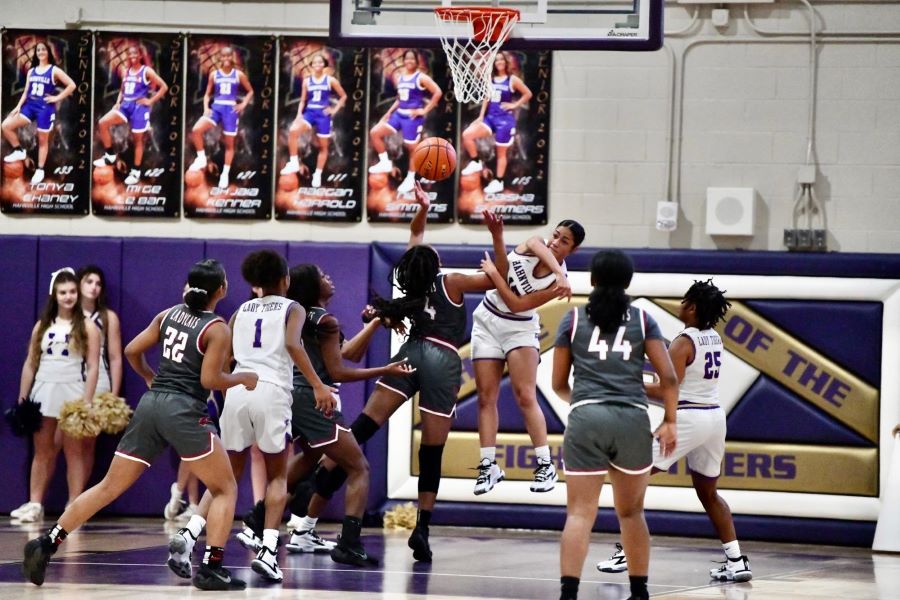 Mitchell finished a Hahnville fastbreak with a layup after Harrold forced a DHS turnover to make it 25-13, and the Tigers defense forced back-to-back traveling violations. Amiree Henderson broke up the scoring run with a layup for Destrehan, but Lee answered with a jumper at the other end. HHS took a 15-point lead into half, 33-18.

A Lee 3-pointer early in the third quarter and an Irons driving score drove the lead to 18 for Hahnville, which outscored DHS 19-9 in the quarter to all but put the game away.

This was the first Hahnville/Destrehan game to take place in the Tigers’ renovated gym – and the first in several years, with recent seasons taking place at R.K. Smith Middle.

“You know, it’s like I told them, you’re not going to Destrehan (R.K. Smith) tonight,” Smith said. “We’re playing right here. It hasn’t happened since I’ve been here in my six years, it’s always been at R.K. It was a good crowd. You don’t always know what your performance is going to be in that environment, but I think because we have such experience out there on the floor, our girls were even keeled.”

Smith said Hahnville played like it needs to play in order to defend a District 7-5A crown the team has worn the past three seasons.

“We’re district champions, and we have to be ready to defend that,” she said. “We’re the team to beat, and that means coming prepared every day and being ready to play four quarters.”

“Their press hurt us,” Miller said. “We never got set up in our fast break, and that hurts. Any time you have a team kind of freelancing … that’s just not going to work. We needed to be on the same page and their press took us out of our game. We couldn’t handle what they threw at us. They were ready and we weren’t, and that showed in every aspect.”

Miller said things will need to turn around quickly after the Hahnville loss dropped the Wildcats to 0-3 in district play. After a promising start to the season, the Wildcats are searching for answers.

“We aren’t where we want to be, or thought we would be, right now,” Miller said. “I think we’ve got away from the basics, the fundamentals that were working in the beginning for us. We were putting a lot of work in and I think we saw how good we can be, and thought things should just happen for us and that’s not how it works. So, time to go back in, work hard and earn it.”

Like so many young people in the St. Charles Parish community, Luling resident Paige Bartolo is grieving the deaths of three of her friends. […]