Another year, another deep playoff run for Destrehan.

The Wildcats (9-1) have been a state semifinalist or better in three of the past four years. With a win in  Friday night’s quarterfinal at No. 13 Ruston (7-2) the No. 5 seeded Wildcats can make that four of five seasons.

Nothing figures to come easy, though, in what promises to be a punishing matchup between teams that impose their will physically on their opponents. Ruston plays a brand of football that Destrehan coach Marcus Scott said harkens back to some of the Bearcat teams of yore – the program  counts eight state championships in the ranks of its history, including four from 1982 to 1990. Those teams were big, strong, and typical of the top programs from north Louisiana historically. Thus far, the Bearcats have a 41-17 opening round win over No. 20 Hahnville and a 42-26 second round win over No. 4 Ponchatoula on their playoff resume in 2020.

Scott offered a wry chuckle when the subject of Ruston’s size and strength came up. 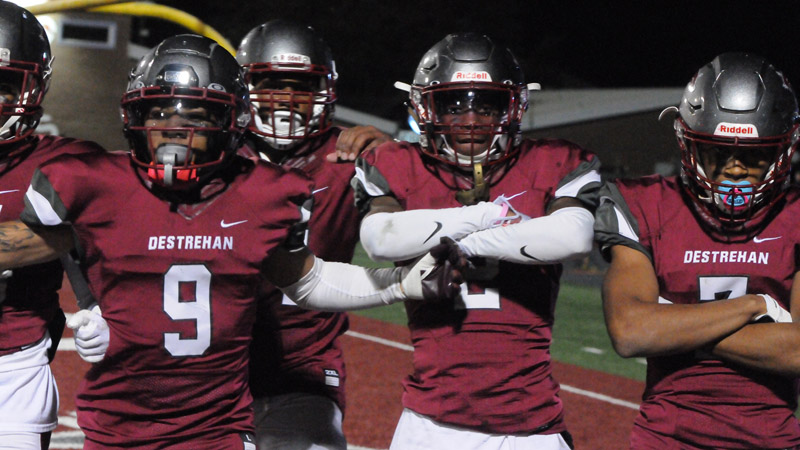 Behind that size is a impressive blend of speed and power in running back Ke’Travion Hargrove, one of the top running back recruits in the nation and a four-star prospect. Hargrove has had a dominating postseason, including a 206-yard, two touchdown performance against Hahnville. ” Stopping Hargrove, nicknamed “Bull,” will be the first order of business for Destrehan’s accomplished defense.

“He runs through contact,” Scott said. “He can make you miss in the open field and catch it out of the backfield as well. Whoever gets him at the next level is getting a really good, really skilled player.”

Ruston attacks via the Power-I, and when it puts the ball in the air, it relies on play action set up by a steady diet of runs. Quarterback Jaden Osborne has been sharp this postseason and is a dangerous runner in his own right.

Scott is no stranger to this time of the season. He led John Ehret to the Class 5A state championship game two years ago and has played and coached in numerous big games. When you get to the quarterfinal round and beyond, things tend to tighten up, he said.

“It becomes simpler,” Scott said. “The playbook becomes smaller and the focus is a little more narrow. A lot of times it comes down to running the ball and stopping the run, with the weather conditions you experience this time of year. It will be interesting.”

Like Ruston, Destrehan’s best offensive work has come via the ground game. The passing game has exploded throughout every level of football, but this will be an old school type of game. Scott, a former Jesuit Blue Jay player, has a special fondness for it.

“North Louisiana teams are, usually, always tough, hard-nosed, big an can run the football. This is like those Ruston teams of old.”

READY TO ROLL: Destrehan had to close its second round victory against Dutchtown without it’s “closer,” as running back Razan Keller was shaken up early in the fourth quarter and gave way to Shane Lee for the rest of the evening. Keller returned to practice this week, though, and Friday night figures to be the powerful back’s type of game. Both he and Lee figure to see plenty of action.

ROAD TRIP: This will be Destrehan’s longest road trip of the season, by far, an estimated time on the road of just under five hours and nearly 300 miles of distance.

It’s out of routine, for sure, for a team to travel as far. Scott said good preparation mitigates a lot of concerns in that regard.

“You don’t want to be rushed, really the biggest thing,” Scott said. “Make sure you stay on schedule and make sure everyone knows the itinerary. No surprises. All it takes is proper planning. It can become a big deal, but not if you handle it properly.”

GUTS AND GLORY: Destrehan won it’s ninth game in a row last week via a 20-10 score against Dutchtown, and did so in part behind a gutsy call in the second half: Scott and his staff elected to go for  it on a fourth down and 3 from its own 41 yard line. Keller surged through an opening and raced 59-yards for a touchdown, lifting Destrehan ahead 13-10. That run was the big gain on a night Keller gained 84 yards on 11 carries.

Safety Kelvin Lea later put things away on his interception return for a touchdown. Two Will Bryant field goals and a Kevin Adams crunch time interception were also among highlights for the Wildcats.

FULL STRENGTH:  Ruston’s lone two losses this season came against Acadiana and Catholic-Baton Rouge. Its most dramatic win of the season came in triple overtime aganst Neville. Those three opponents have a combined five losses; Ruston handled its other six opponents decisively. The Bearcats were banged up at different times of the season, but rounded back into form and near full strength as the postseason began.

The St. Charles Parish Council adopted an emergency ordinance this week that will allow the Department of Planning and Zoning to waive local permit fees and various plan review and inspection fees for repairs and […]

St. Charles Parish charities, faith-based organizations and small businesses can now apply for up to $25,000 in grants to support COVID-19 response and relief efforts in Louisiana through the Louisiana Nonprofit and Small Business Assistance Program. […]