Jai Eugene and the Destrehan offense capped off Destrehan’s preseason intrasquad scrimmage with an impressive flurry in the two-minute drill, showing off the explosiveness and upside of a unit including a core group that’s played years worth of reps together.

Eugene dialed up Shane Lee on a long 50-yard touchdown pass to cap one two-minute drill series, while he hit Leslie Jefferson on a 15-yard touchdown in which the latter broke through a tackle to score after catching a short pass. That made it two-for-two in the drill session of the scrimmage, which concluded the day. Daniel Blood set up the second score after catching a pair of passes for strong gains.

For Eugene, a senior, the day as a whole was perhaps as sharp as he’s ever looked in a preseason outing, and the Wildcats’ offensive staff leaned on him throughout the day – which pit the teams first team offense and defense against one another, and the backup units against each other. Destrehan put the ball up early, often and successfully, with the first team offense gaining steam as the day went on.

“It’s competitive, man … we’re out here trying to get over the hump,” said Eugene, entering his third full season as starting quarterback. “We’ve lost in the semifinals twice, and I’m going hard every day with my guys. Lutcher’s coming up (in the jamboree next Friday) and we’re trying to click as time goes on, finding what works against different defenses. 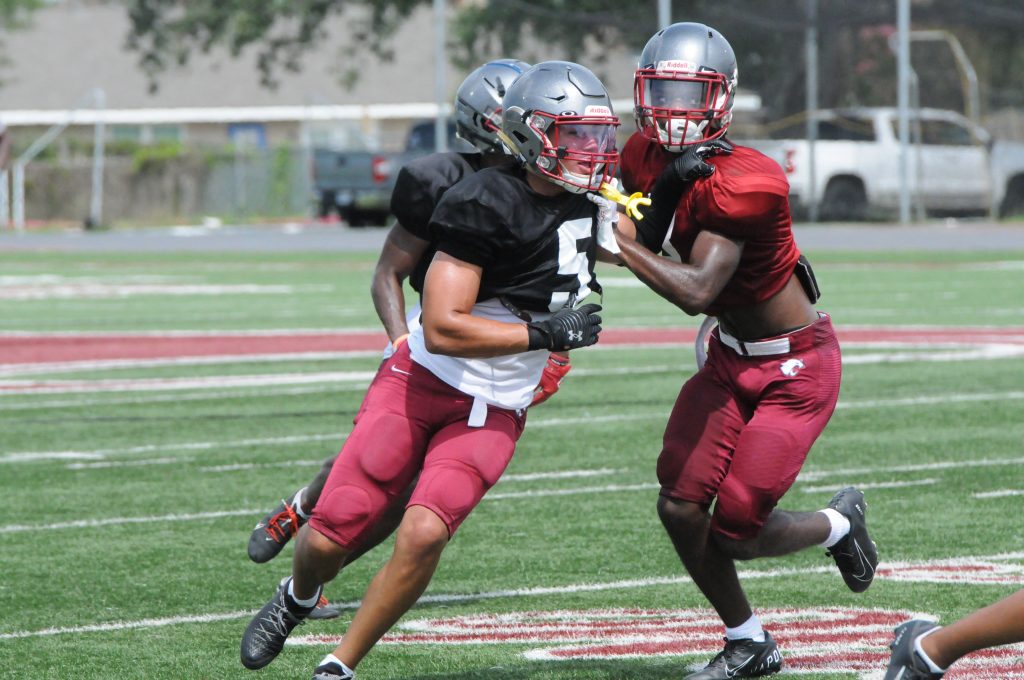 Destrehan head coach Marcus Scott said Eugene’s performance is the continuation of what’s been a very strong summer for the passer, who is a highly sought after recruit as a defensive back on the collegiate level.

“He’s worked extremely hard over the offseason, and you know that’s a key for us to be successful, to mix up the playcalling and be multidimensional,” Scott said.

The Wildcats’ defense, however, had its own time to shine on the day. It opened up the day strong, turning the Wildcats back in early action during the portion of the scrimmage with a pre-set number of plays, and the first and second units alike allowed no points in that period.

During a portion of the scrimmage where the team simulated a situation where the offense is backed up near its own goalline, cornerback Tai Terrell came through with a nice pass breakup on a deep ball. With the second unit, Michael Lagrue picked off a pass to end a drive.

In redzone drills, Eugene again showed his strong connection with Blood and Jefferson, finding each for scores.

Scott said at this point in the year, it’s all about tightening up the basic fundamentals of the game. He added that in next Friday’s jamboree battle with Lutcher, he’ll be especially focused on the kicking game as that gets its first live extensive work. The Wildcats are replacing Will Bryant, who graduated this year and who’s been a standout at the position in recent years for DHS – Bryant served as placekicker and punter last season.

Brittany Bonnaffons of Hahnville High School was one of 22 educators from across Louisiana recently selected for the Louisiana Department of Education’s 2022-23 Teacher Advisory Council. […]