Down eight to Zachary and needing a defensive stop to keep its season alive, Destrehan’s defense dug in with eight minutes left in the fourth quarter. It was the type of situation the Wildcats have come through in, time and again, season after season.

This time, it wasn’t to be.

Eli Holstein led top-seeded Zachary on a 99-yard touchdown drive that put the Broncos ahead 27-13, that momentum carrying through the final whistle as host Zachary earned a 34-13 Class 5A semifinal victory. Zachary (14-0) moves on to face Ponchatoula in the Class 5A championship game next week.

“We had some opportunities to extend some drives and do some things. Obviously, they made a few more plays than us tonight,” said Destrehan head coach Marcus Scott. “We had a couple short and manageable first down opportunities, and we mishandled the ball a couple times … we went from third and one to fourth and five, things like that. That’s not a recipe for success.”

“For us to get a shutout in the second half against those kind of athletes, right there, we’re very proud of our guys tonight,” Brewerton said. “They played incredibly hard tonight.

“Our guys played really well up front and accepted the challenge. (Destrehan) likes to smash the football, and our guys took that as a personal challenge tonight.”

Will Bryant punted early in the fourth quarter and DHS pinned Zachary down at its own 1-yard line with just over eight minutes left to play. The Broncos led 21-13 and did not go into a conservative shell – Zachary trusted Holstein, and the Texas A&M committed junior showed why he’s been a sought-after collegiate recruit. He fired passes Kameron Senegal and Tylon Williams to work the ball down the field, on slants over the middle and outside at the line of scrimmage, looking for yards after the catch.

But he finished the drive by firing a deep ball down the right sideline – and into the hands of his most dangerous receiver, Charles Robertson. The ULL commitment hauled in a contested reception in the endzone for a touchdown with 5:24 left, making it 27-13 Zachary.

“(Holstein) is a good player, and he certainly made some big throws when they needed him to,” Scott said.

Said Brewerton, “Our passing game can be an extension of our run game. We felt like if they continued to give us the short stuff, we’d continue to try and take it. We knew they would load the box up right there. We hit just enough deep stuff to where they had to respect it.” 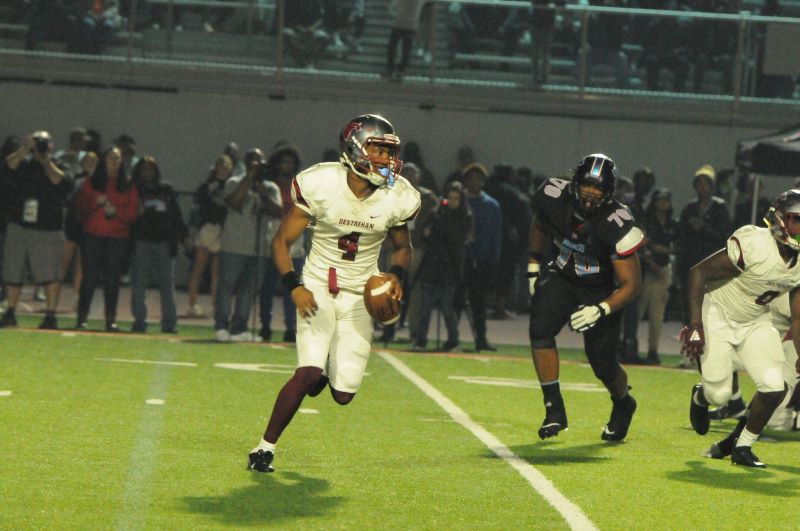 The Broncos outscored the Wildcats 20-0 after halftime; it led 14-13 at the break. A suffocating defensive effort was the difference. Zachary forced four punts and intercepted a pass in the second half, those results representing Destrehan’s five possessions after halftime. In short yardage situations, the Broncos won at several key moments, making stops at or behind the line with a yard to go for conversion.

On Destrehan’s ensuing drive, Jai Eugene connected with Leslie Jefferson to convert on a 4th and 1, keeping the Wildcats alive. But Zachary’s Jerome Robinson intercepted Eugene on a deep pass to end the threat, and a play later Connor Wisham broke loose for a 41-yard touchdown to put an exclamation point on the win.

Zachary built an 11-point lead early. Holstein completed a ball to Wisham on a screen that resulted in a 35-yard touchdown to make it 7-0 late in the first quarter.

Brandon Freeman broke loose on a long run that set up a Will Bryant field goal for a Destrehan (9-1) answer, cutting the lead to 7-3.

Wisham punched in a touchdown run from four yards out to make it a 14-3 Broncos lead with just under seven minutes left in the first half.

Destrehan got within four on Eugene’s 17-yard touchdown pass to Daniel Blood. Momentum seemed to shift in the Wildcats’ favor heading into halftime when Jermaine Stewart recovered a fumble on the ensuing kickoff. It ultimately set up a field goal by Bryant.

Zachary marched down the field to begin the second half, scoring on Camryn Stewart’s 3-yard touchdown run, set up by a long pass from Holstein to Robertson, making it 21-13.

“Our kids overcame so much this year. Our community was great. Our administration has been great. And we couldn’t ask for a better effort from our kids,” Scott said.

In year one under head coach Troy Green, Destrehan learned his way of doing things on the basketball court. […]

Destrehan’s been trying to weather the storm early in the 2021-22 season, meshing several young new faces in with their more experienced counterparts amid a rash of injuries, but their recent results show the Ladycats’ determination. […]

Frances “Puddin” Lussan Greenfield, died on Saturday, January 15, 2022 at her daughter Mary’s home in Crosby, Texas, at the age of 94.  She was surrounded by some of her children and grandchildren. She was […]