Hahnville was on the ropes midway through the fourth quarter of its quarterfinal battle with Bonnabel Friday night, following a rare five-point possession and after its frontcourt leader, Kaden Pierre, had fouled out of the game.

But the Tigers long ago learned to battle through adversity, and it’s what they did once again.

Hahnville is moving on to the Class 5A semifinals and the LHSAA state basketball tournament for the second straight season after closing out a 52-50 victory over Bonnabel in front of a loud and proud fanbase at HHS.

No. 4 Hahnville (21-3) moves on to the state semifinals to matchup with top-seeded Natchitoches Central, which bested Captain Shreve 41-39 to advance.

Corey Lorio scored on a go-ahead basket with 36 seconds left to play, which made it 48-47. From there, Hahnville drew a Bonnabel offensive foul at the other end, and Claudell Harris sank two at the line to put HHS ahead by three. After a stop with less than 10 seconds remaining, Harris stepped back to the line and sank two more to put away the victory. 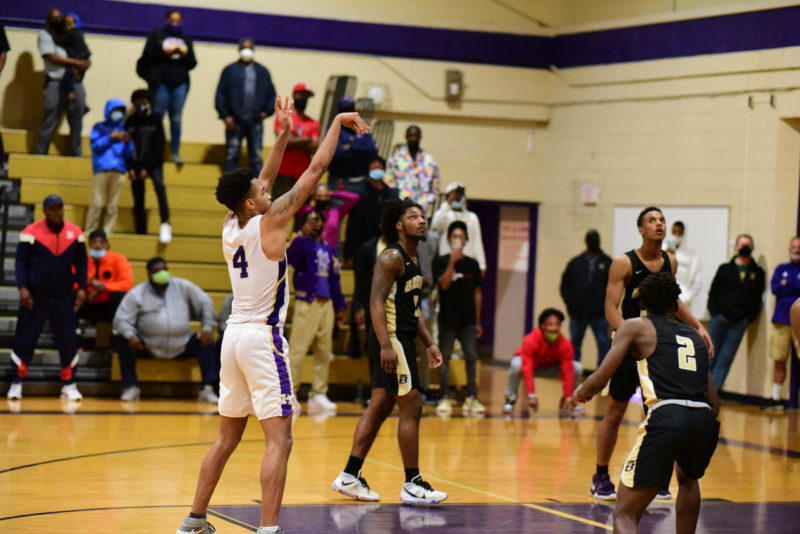 “I knew when (Pierre) fouled out, we lost a big part of our offense on the interior and I knew I’d have to step it up and find some way to contribute,” said Lorio, the team’s defensive stopper at guard. “All year, I knew I’ve got MJ, Tyren, Kaden and Koi on offense, so I’ve got to find a way to contribute. Making big plays and being where I’m supposed to be is what I’m good at.”

Just minutes earlier, the Tigers seemed to have momentum squarely on their side, but a near worst case scenario materialized: after taking a five-point lead on a fierce Kaden Pierre dunk, the Tigers saw the lead evaporate in one possession after Pierre was called for a technical foul. Bonnabel’s Nomar Dijol sank both free throws for the technical, then hit a 3 to knot the game up 38-38.

Pierre answered with a basket at the other end, but perhaps the more severe consequence was the technical equated to his fourth foul. Moments later, he was whistled for a charge and his fifth foul of the night and would have to watch the remainder of the game from the bench with 5:19 left to play, after a strong showing offensively in the second half.

Enter Tyren LeBeauf. The Tigers guard had struggled at times in the playoffs after missing time late in the regular season, but was back in form – and critical down the stretch. He hit two 3-pointers, each putting the Tigers up four. The second answered a corner shot from Benard Hubbard of Bonnabel that had cut it to one.

“One of our big players went out in Kaden, and we had to pick it up. I told MJ (Harris) we’ve got to pick this up if we’re going to get back to the final four,” LeBeauf said. “I just did what my team needed me to do … we’re honestly used to adversity. We just fought. We fight no matter what.”

With 1:19 left Dijol hit a high-arcing 3 from the wing to pull Bonnabel within one again. The teams traded turnovers with less than a minute remaining – a Koi Smith steal of an entry pass gave Hahnville possession, but Hubbard stole the inbounds pass and Vandell Smith scored to push Bonnabel up one.

Lorio found space at the other end and scored to push Hahnville back ahead. The Tigers defense clamped down from there.

Hahnville dug in defensively after falling behind 28-20 at halftime. The Tigers took the lead after starting the second half on a 14-4 run. At the offensive end, Hahnville regrouped to find a better way to attack the Bonnabel zone, getting the ball to Pierre to score or find open teammates as a passer – he scored eight of his 10 points after halftime.

“We got in the locker room and said we’ve got to pick up our energy somehow, and we always start on defense,” Lorio said. “We knew we had to lock down on defense.”

Bonnabel, likewise, was determined to limit Harris, Hahnville’s leading scorer, throwing extra defensive attention his way for much of the night. He still found a way to make the most of his chances when they materialized, finishing with a game-high 20 points. LeBeauf scored 16 and Pierre 10.

“It was something we had to adjust to, but we made it work,” Harris said. “Really it came down to attacking. We were settling too much in the first half and we had to put pressure on them in the middle.”

Will Allen and Smith led Bonnabel with 12 points each. Hubbard and Dijol each added 11.

For Hahnville head coach Yussef Jasmine, it marks the second time in four seasons with the team that he’s guided the program to the 5A final four, after doing so last year. He said the crowd offered quite the assist on this night to getting his team back there.

“With COVID, there are restrictions, but this gym is one of the loudest I’ve been in,” Jasmine said. “They know what we’ve built and what our guys have built by the constant hard work, grinding, pushing to get to the next level.”

Jasmine said he’s pleased for the Tigers to be back to the state championship tournament. But he also noted – as did several of his players – just getting there isn’t enough for them this time.

“It feels good, but we made it there last year. We’ve got to finish the job this time,” Lorio said.

Added Harris, “It’s all fun and games, but at the end of the day, we’re here to take care of business. We didn’t do anything unless we’re state champions. That’s my mindset.”

For five softball players, a season is yet to come, and for two volleyball players, their careers on the prep court are behind them. […]

Dolena “Doll” Annette Matherne Robert, a native of Des Allemands, and resident of Ama, Louisiana passed away on Thursday, January 6th, 2022 at the age of 87. Doll was born April 6th, 1934 to the […]

There was disappointment in the voice of Milton Cambre, and also a tinge of understandable anger. […]