Destrehan’s Calvin Bullock smiled as he took in the scene.

“Coach has been telling us from day one we had a chance (to contend) this season,” Bullock said. “And I feel like we do have a chance. I believe it.”

In front of a full house at the Wildcats’ home gym Friday night, Destrehan made quite the statement that it could be on the way to doing just that this postseason. Behind a stout defensive effort, Wildcats defeated rival Hahnville, 54-41, Destrehan’s first win over Hahnville since January of 2018, snapping an eight-game Tigers winning streak in the rivalry.

Consistency on defense was the name of the game for DHS, which allowed no more than 13 points in any quarter. The win spurred Destrehan to an overall mark of 21-4, by far the Wildcats’ best mark at this point in a season in many years. Two years ago, Destrehan finished 6-21, and Troy Green was named the Wildcats’ new head coach for the following season. Not even two full seasons later, the turnaround has been stark.

Of the team’s four losses this year, one came in the Wildcats’ first game of the new year, by a 69-56 score at Hahnville.

“They got us the first time, but we said if we keep grinding, we’re gonna get them back,” Bullock said. “And we did tonight.”

Green said his players showed how much they’ve come together in the performance Friday.

“We’ve been trying to preach to these guys about what it is to be a team, and they showed what that is tonight,” Green said. “When you have a team, sometimes you don’t know who’s going to excel. You have to feed off one another.”

And one who excelled was Jefferson, who Green said had a breakout performance in the rivalry showdown.

“This was a coming out party for him,” Green said. “We’ve been talking to him … he’s been up and down for us. I have confidence in him … we had a long talk the other day. He has to trust himself and listen to the coaches. And when he does, look at what he can do. You saw it tonight.”

Green wasn’t the only one impressed by Jefferson’s night.

“He made some tough shots tonight … he sparked them, big time,” said Hahnville head coach Yussef Jasmine. “I thought he did a phenomenal job.”

While Jefferson’s hot shooting guided his team late, it was Daniel Blood who had the early hot hand for Destrehan. He registered the first basket of the game on a 3-pointer; he added a deep 3 and then another from the corner – the latter gave Destrehan a 13-4 lead, and the fans reason to ignite.

“Daniel had confidence in himself … he made those shots and got the crowd going,” said Green. “The student section really gave us a lift, gave us energy tonight. We fed off that and built that lead early.”

A Price putback got Hahnville stirring on offense, and the Tigers pulled within four, 15-11, at the end of the first quarter. That advantage held into the half, DHS taking a 24-20 lead into the break. 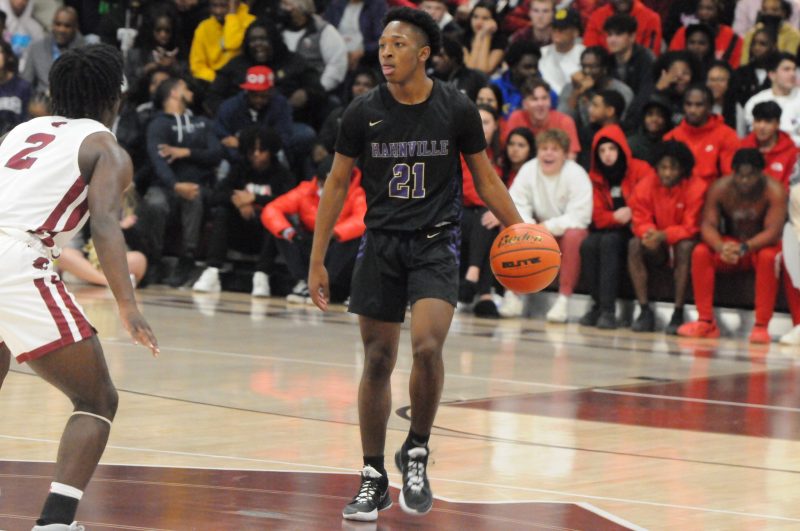 Jai Eugene scored on a pull-up jumper to get the Wildcats going in the third quarter. Cincere Simmons answered with a bucket at the other end.

With Destrehan up by three, Makylon Smothers scored a basket that kicked off a run. Jefferson scored on a transition layup, then sank a 3 with 3:32 left in the third to put his team up 10. A Fourcha basket gave Destrehan a 12-point lead, its biggest of the night to that point.

Another Smothers basket early in the fourth pushed DHS ahead by 13. Hahnville trailed 43-28 when another pivotal moment came – Hahnville’s leading scorer this season, Cameron Lumar, committed his fifth foul with 6:44 remaining, fouling out for the remainder of play.

A struggling Hahnville offense couldn’t afford to lose that firepower, and Destrehan took advantage. Bullock scored a layup on an inbounds play to push his team ahead by 16. Jefferson slashed through the paint and to the basket for a layup of his own, then followed up with a runner. Bullock followed up with a score to push Destrehan ahead by 21, 52-31, and the Wildcats rode that tidal wave of momentum to the final buzzer.

Jasmine said the Tigers have been struggling offensively as of late – another stern test on Thursday saw Country Day best Hahnville 46-29. Finding a way to break free of the two-game shooting slump is a must, with a matchup looming Tuesday against district foe East St. John.

“It was a terrible shooting night for us,” Jasmine said. “We can’t shoot like that and expect to beat a team like (Destrehan), a top 10 team. When we struggle to score like we did, it’s tough to keep up with athletic guys like them … we turn it over, they turn that into points.”

Pro Football Hall of Famer and Destrehan High alum Ed Reed will be manning the sideline in a new role next football season – as the head coach of a college program. […]

The single he released earlier this month is one of the most personal songs he’s ever written, Jim Lockwood said. […]