An SUV from a nearby gas station rushed forward rather than in reverse and slammed into the backside of a Luling orthodontics office Sunday morning.

“From our understanding, it was just a mistake on the driver’s end,” said Michelle McGinnis, office manager of Hamada Orthodontics. “They wanted to go the opposite direction and instead went forward.”

No one was injured in the single-vehicle accident at 118 Lakewood Drive.

The building sustained substantial exterior damage to the brick exterior and structural damage, particularly in the area of Dr. Allison Hamada’s office, she said.

McGinnis said the extensive damage includes broken support beams, broken cabinetry and some flooding due to water being turned on when the vehicle nearly entered the building.

“It’s closed indefinitely until further notice,” McGinnis said. “We’ve reached out to all our patients and will open the Destrehan clinic more. Everyone has been really understanding so it’s been really helpful.” 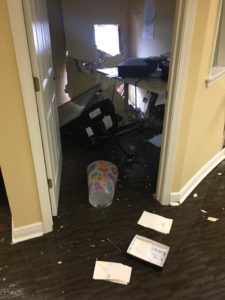