A Harvey man has been arrested in connection with the Jan. 21 attempted armed robbery of the Thrift Village Drug store in Luling.

Jeremy David Stewart, 45, of Harvey, has been charged with principal to attempted armed robbery, according to the St. Charles Parish Sheriff’s Office.

Stewart is the accused accomplice of the late Mark Fisher Jr., 36, of Madisonville who apparently tried to rob the drug store. Fisher was shot by the store pharmacist, who was not identified, and bled to death at the scene from a single shot to his leg that hit an artery.

The Sheriff’s Office said the investigation led to “sufficient probable cause” identifying Stewart as an accomplice to the attempted armed robbery.

Fisher entered the store wearing black clothing, including a face mask and gloves, and apparently attempted to rob it, according to the Sheriff’s Office. He ordered the clerk and pharmacist go behind the counter and then demanded drugs at gunpoint.

Fisher then produced a zip tie and strapped the clerk’s hands together, and apparently attempted the same with the pharmacist, but he retrieved his handgun to defend himself and the clerk, according to the Sheriff’s Office.

A fight between the two ensued.

Fisher fled towards the front door followed by the pharmacist who attempted to lock it, but Fisher suddenly turned back and charged him. The pharmacist fired one shot from his handgun, striking Fi 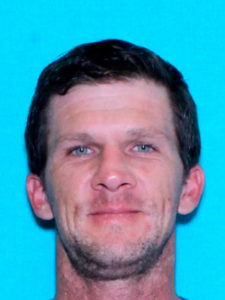 sher in the femoral artery of his right leg.

The Sheriff’s Office reported Fisher had run about 100 yards out and around the store where he collapsed in the rear of the strip mall and died.

Champagne said no criminal charges are anticipated against the pharmacist.

“All indications in this investigation, including the recovered store surveillance video, shows that the pharmacist and the store clerk’s lives were in imminent danger, justifying the use of deadly force,” he said. “This incident is currently deemed as a justified shooting.”

Sheriff Greg Champagne reports Stewart was booked into the Correctional Center for a warrant issued in relation to the above mentioned charge.

The warrant claimed on Jan. 21 detectives investigated an incident at Thrift Village Drug Store where a subject, Mark Fisher, was shot while attempting to rob the drug store.

During the investigation sufficient probable cause was obtained, identifying Stewart as an accomplice to the attempted armed robbery, according to the Sheriff’s Office.