It was a hectic day for Heather Nocito last Friday as she volunteered still more hours at Ashton Manor Assisted Living & Memory Care in Luling.

“I had to help people,” Nocito said. “I had to get water and ice. I took out old photos on the bulletin board in the activity room and put new ones. I peeled crawfish for people – for those who couldn’t. I passed out drinks.”

Nocito’s day started at 8:50 a.m. and on arrival the recent Hahnville High School graduate also had to move boxes and food.

“Normally, exercise starts at 10 a.m. and at the end I hand out water and Ashton bucks (residents use them to get certain things at the center),” Nocito said.

Other days have not been as demanding with her playing cards with residents or serving them food and drinks.

But, it’s all fine. Nocito is a warrior volunteer.

With 142 hours spent at Ashton Manor during the summer and another 162 hours volunteered at the Satellite Center, it’s pretty clear Nocito likes helping others.

“It actually started as a senior project with two summers at Ashton and I just fell in love with it and kept doing it,” she said. “It’s giving back and helping people.”

In a nutshell, Nocito adds, “I’m a people person.”

At the Satellite Center, she helped serve food to the homeless in New Orleans.

“We served them and talked to them,” the Hahnville resident said. She is the daughter of Anthony and Tammy Nocito. “We did Battle for the Paddle. We help anybody in need, and there’s a lot of field experience, too.”

As a student in the center’s Hotel, Restaurant and Tourism class, the HHS senior was able to be of service.

“I found something I enjoyed so I kept doing it,” she said of volunteering. 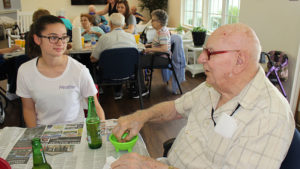 In her junior year, she came out of her shell. Nocito joined the Student Council, and got into volunteerism.

The light went on, she said.

She also appreciated her high school.

“Hahnville High was a fun school and I had a lot of student involvement … always something new on Fridays and weekends or games to go to,” she said.

Although she’s moving to Jefferson Parish to live with her father in anticipation of going to college, she intends to keep on volunteering. If she does enroll, she’s going into hospitality management.

As she contemplates the next step in her life, Nocito reflected on what she loved most about HHS.

“I’ll miss the teachers,” she said. “I had awesome teachers.”

Heather by the numbers

Destrehan High School has named new head coaches for their boys and girls basketball teams, announcing the appointments of Troy Green Sr. and Jenn Miller to lead those respective programs at Wednesday night’s meeting of the St. Charles Parish School Board. […]

A convenient location. Family who lives nearby. The public school system.

For everything Barry Cottrell Jr. loves about St. Charles Parish, the grim reality is his Destrehan home has flooded a handful of times in the four short years he and his family have lived there. […]

Faith was what guided Al Cutno through his darkest time.

The LaPlace man faced death while serving his country Vietnam as a member of the U.S. Army’s Green Beret Special Forces, spending a tour there each year spanning from 1963 to 1968. Thousands of American troops were killed in the conflict. […]