It still doesn’t feel real to Ivory Sims, though she can actually feel her creation as she holds it in her hands.

The St. Rose mother is now a published author.

Sims’ book, titled “Dryston, it’s okay,” is now available at Barnes and Noble and Amazon.com while digital copies are available on Google Play, the culmination of about a year long process to have her work officially published. Sims’s 6-year-old son, Dryston, was diagnosed with autism when he was approximately two years old. Her book was inspired by her journey thus far with her son.

The children’s book is about the challenges autistic youths deal with, such as handling mistakes or when things don’t go a certain way.

“Things that seem small to us can be big to them. But talking to your child, they get what you’re saying to them, and you’re telling him that it’s OK, it’s OK,” Sims said.

The hope is it communicates to other families like theirs that others are going through this journey, and though sometimes the hardships seem impossible to get through, that it’s indeed possible with patience and willingness.

Once the book’s production was finished, it was to take four to six weeks to become available for purchase. It took a bit longer than that, Sims said, but one day she looked online and found the book on Amazon.

“Then I found it on Barnes and Noble, and then I found a clip of it on the publisher’s YouTube … it was and is really exciting,” she said. “I’ve felt very anxious about this, but overall I feel accomplished.

The book delves into what an autistic child may go through on a day-to-day basis, and how a parent must be patient and find different mechanisms and avenues to calm a child should an episode occur.

“They may freak out about something … but you have to be a strong parent for them,” Sims said.  “I know there’s other mothers and other parents and how they go through this stuff  … you feel like you’re drowning or I don’t know what I’m doing. I feel like they can read it or look at it and say ‘I’m going to be okay. We got this.’”

The book was published by Fulton Books, a company in Pennsylvania. 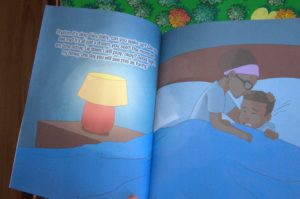 Dryston is nonverbal—approximately 30 percent of people diagnosed with autism never learn to speak more than a few words. Those with autism can be prone to bursts of distress or emotion that can be difficult to manage — not limited to children —for both the afflicted and their guardian or companion at a given time.

Sims began to have concerns about Dryston’s development when he was 10 months old because he was having difficulty crawling, then at the age of one he wasn’t learning to speak at the expected pace. She had his hearing checked out, and it was “perfect.” She was referred to an early steps program, and at that point the prospect of autism was discussed. After an evaluation, that suspicion was confirmed, and it was an emotional time, Sims recalled.

But she found her inner strength, and says as much as she’s taught Dryston, he’s taught her “so much.” He also gave her, in his own way, the title of her book. She remembers a day she was trying to juggle bills and make ends meet one day and was losing patience. Dryston found her and said, “Mommy, it’s OK.”

“When your non-verbal child opens his mouth and actually says that to you, you know you’ve gotta take the medicine that you give. We teach one another about patience,” Sims said.

In the past year, the boy has progressed greatly. He’s now writing his name and can count to 100. He knows his alphabet and the seasons of the year, Sims said.

“He’s on the money with it,” Sims said with a laugh.

As exciting as Sims’ seeing her vision for a book come to life has been, the good news doesn’t end there. She sent a second manuscript to Fulton Books and they quickly approved that for a second book release.

This one, titled “The ABCs of Dryston’s Autism,” delves a bit deeper into her personal “how to” of parenting an autistic child, shaped by her experience.

“This one goes a bit deeper on the subject of his autism and how I helped him through specific instances,” she said. “It looks as certain things he couldn’t handle or had difficulty with … more of a look at the specific examples of what an autistic child goes through. This one’s more detailed.”

As that one goes into the works, though, Dryston, it’s okay can lend a helping hand already.

“It took awhile to figure out how to style the pages and do the necessary corrections after writing it … it took more than I thought it would be,” Sims said. “But it’s absolutely worth it.”

Local woman searches for answers after her cat is shot

Brandi Abate’s cat Remy was only gone for only an hour and a half Monday morning before he returned to his St. Rose home bleeding profusely from his face and in obvious pain. […]

by APEX Bin Cleaning - 4 months ago