The St. Charles Parish Sheriff’s Office has its very own Robocop, and several students at Destrehan High School got to learn all about it recently.

That opportunity came as part of an interactive demonstration of the Sheriff’s Office’s Special Response Team (SRT) robot at DHS. Det. Chris Waguespack, a robot operator, taught the students about the robot’s skills and uses, while he in turn learned about projects the Destrehan Robotics team has been working on.

“Mr. Brian Young contacted us and wanted his team members to see it, but also some of his other students to as well to see if they’d garner any interest in robotics,” Waguespack said. “The students seemed really interested and they asked a lot of questions. A lot of times we do these kinds of things for the younger kids in elementary school and that’s great too, but when you’re dealing with the older kids, they’re asking a lot of knowledgeable questions and it’s really enjoyable.”

This robot is a true multi-tasker. 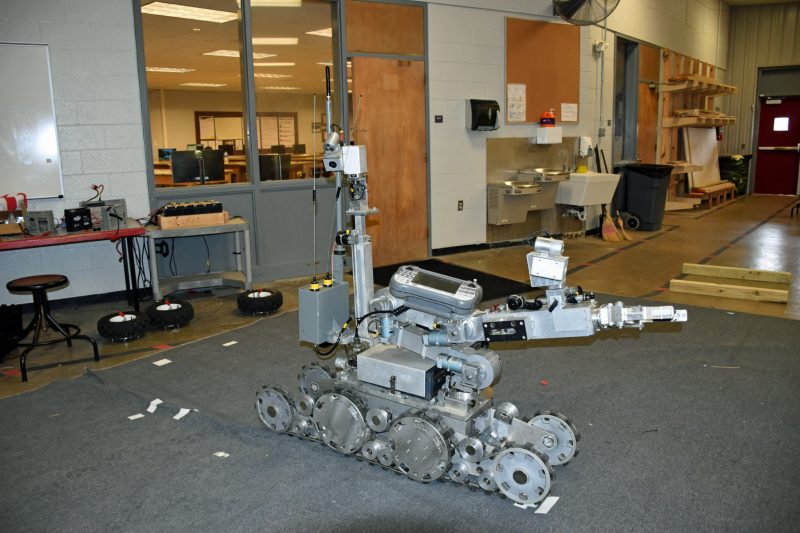 There are four cameras mounted to it, making it useful in surveillance situations. Different tools can be attached for different purposes. It can deflate tires, or punch through a window. A circular saw can attach to it if need be to cut through a door.

The machine’s most critical strength, however, is its ability to bring a police presence into areas deemed unsafe for officers to venture.

In one instance, officers responded to a situation where a man was barricaded inside of a home and with a shotgun. The SRT robot was sent inside, and ultimately helped defuse the situation.

“We were able to use the robot to access the back room he was in, and actually negotiate him out of there,” Waguespack said. “That was a situation we didn’t feel comfortable putting a person in there, not knowing where he was in the house.”

In 2018, Marathon was thankful that the robo-specialist was on the case. A unit was down and workers couldn’t release pressure in the unit – a high pressure steam would have been released and injured anyone in the control room.

“We got the robot in there, they used it to hit a couple buttons and release the pressure and kind of save the unit. That unit was down for a couple of weeks and they were losing a significant amount of money, so having this really went a long way in that situation,” Waguespack said.

The SRT Robot was purchased in 2013 from REMOTEC with a Port Security Grant. It is an Andros F6B model and weighs close to 500 pounds.

It is operated via control panel and can respond to commands from approximately a mile away.

“Depending on the conditions, we can operate it from fairly far away,” Waguespack said. “All we have is a little 2D screen, and you’re trying to operate it in a 3D world, but it functions pretty well.”

Early on, Waguespack was one of only two officers trained to operate the robot. That number has grown to six, with each member of the team able to assume the controls when called upon.

The team has also held trainings at different area plants, as Waguespack notes the robot’s uses can expand beyond the law enforcement world, as its time at Marathon showed.

Councilman will do pull-up every minute for 24 hours, raising money for pediatric brain cancer

On the surface, the challenge facing Dick Gibbs this Friday seems like a physical one. […]

Destrehan preview: Wildcats have Dome return, victory in their sights for 2022

Destrehan is in the midst of one of the most remarkable runs in the state of Louisiana, with playoff runs to at least the Class 5A semifinals in seven of the past nine years. […]