The screams and pleas for help from injured and panicked students to the armed officers flooding the hallways of Harry Hurst Middle School were jarring, as much so as the sound of fired rounds—thankfully, and mercifully, this was only a training exercise.

But horrific as the thought may be, such scenarios do indeed exist in today’s world, and it’s why the St. Charles Parish’s Sheriff’s Office, public school system and emergency responders participate in the kind of joint training exercises that happened at Hurst Friday. While the hope is the knowledge gained through this practice run — in this case, a simulation of a shooter or shooters opening fire within the school during a typical day of classes — it acknowledges that you can never be too prepared.

“What this training does, is when a real event happens, as we all know, there’s panic and confusion. For law enforcement and military training, we train where reaction becomes a habit and you can put panic aside to some degree, know what their job is and do it for force of habit,” said St. Charles Parish Sheriff Greg Champagne. “You revert to the level of your training.

“It’s unfortunate that we have to train for these types of things, but in today’s world we have to do it.”

The training exercise is held at one parish school every other year. It’s earned national recognition and awards over the years and has inspired the beginning of or changes to similar drills in other states.

The idea is to mimic a mass casualty event, such as an assault on a school or terror attack, and serve as a training exercise for school staff, law enforcement, fire departments, hospital workers and other assisting agencies.

The last occurrence of the exercise came in 2017 at Hahnville High School, which was the first time a high school venue had been used.

Friday represented the seventh year St. Charles Parish has held the joint exercise, which Champagne said provides preparation to respond not only to a threat or situation at a school facility, but one anywhere, be it a business, public building or other setting.

A number of student role players assisted with the exercise, acting as the wounded and frightened and giving responders feedback during the simulated event, such as where the shooter was last seen or what they saw as the shooting was unfolding. Teachers and other school administrators also participated in order to drill and learn how to approach such an event were it to occur.

The officers and other response personnel treat the exercise as they would — or as close as possible — to a real scenario and the intensity of such was felt by several nearby onlookers who had the chance to watch the exercise unfold.

Champagne said the training for his officers is only part of the equation.

“It’s unfortunate that we have to train for these types of things, but in today’s world we have to do it.” – Sheriff Greg Champagne

“I think our staff can never really understand what an event like this would require of them, but it does simulate at a very low level as to what it might entail,” she said. “It gives them more of a real life perspective as to what might happen and how they might respond.”

Champagne said the exercise is one part of a comprehensive program that has progressed over the years since the infamous Columbine High School shooting incident in 1999. He notes the focus lay not only with response, but prevention.

“There’s a lot of deterrence involved, spotting problems before they happen … we work with teachers and administrators about looking for students who might be depressed or despondent,” Champagne said. “If we get to this point, obviously you’re at a much higher, more critical stage where people are liable to get hurt.” 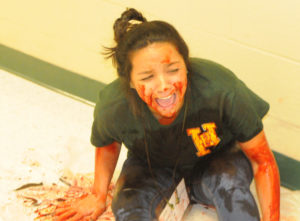 It all began 10 years ago when facilitators and team members of the Health Science Pathway at the St. Charles Parish Public Schools’ Satellite Center decided they wanted to do something to raise awareness for breast cancer – the Pinks Links Competition was birthed. […]

Hahnville had to wait a little bit longer than expected for its road battle with Central Lafourche, the game rescheduled midweek to be played Saturday morning due to aftermath of Hurricane Zeta. But once the Tigers arrived, they proved to be hungry as ever. […]

by APEX Bin Cleaning - 5 days ago

by Louisiana Catfish Festival - 1 week ago

by Gulf Engine & Equipment - 2 months ago