The saga of Andrew Robison, the senior football quarterback who in August was ruled athletically ineligible for his senior year by the Louisiana High School Athletic Association, took another sharp turn last week when the Robison family made good on their threat to pursue legal action.

The order specifies there is no grievance against Hahnville High School but that Hahnville must follow the court order of restraint against ineligibility, thus in theory protecting the school from LHSAA punishment for doing so.

Robison was ruled ineligible in August after an LHSAA investigation into recruiting violations alleged by Vandebilt Catholic, Robison’s former high school, surrounding his transfer to Hahnville. Other sanctions passed down by the LHSAA were a four-game suspension for Hahnville head coach Nick Saltaformaggio and a $2,500 fine of the school. 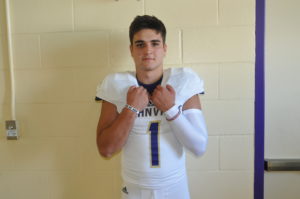 Allegations in Robison’s court petition include:

*That Atwell has contacted several college coaches who are or were recruiting Robison and told them they should cease recruiting him because he is a ‘low-character guy.’

*That the LHSAA held a “careless, haphazard investigation’ and utilized former principals who are not trained investigators.

*That Robison’s mother Coyler told LHSAA investigators her son was being bullied by Atwell, but that the bullying reports were not noted in the LHSAA report and that LHSAA commissioner Eddie Bonine claimed in a radio interview that had he known of those allegations, it may have made a difference in his decision.

*That the Robison’s lease for their new home was dated May 17, but was noted in the report as being signed on May 21.

*That while Robison has been offered third-party arbitration, that process could take months and effectively wipe out his senior season before a verdict is ever reached.

*That Atwell attempted to incentivize Robison to stay at Vandebilt by offering scholarships for tuition and the offer to find Drew Robison a job.

*That Robison’s recruitment has cooled off and he is getting fewer calls and interest since the LHSAA sanctions were handed down.

The petition also included the Robisons’ timeline of events surrounding the alleged violations.

According to Robison’s petition to the court, his father Drew was relieved of his position as head boys basketball coach in March, costing the family $1,000 per month in income. On May 1, Drew Robison was terminated as a Vandebilt Catholic employee entirely, including his roles as an assistant football coach and faculty member.

Robison claimed that his dismissal led to his family’s immediate realization they could no longer afford private school tuition and thus began looking at public school options. Hahnville fit the bill, they said, as a top ranked public high school in Louisiana that also was within an attendance zone a relatively short distance away from New Orleans international airport — the latter is an important point for Robison’s mother, Coyler, who the family noted travels considerably for her job.

According to Robison, Vandebilt policies dictate a student must pay tuition by a deadline of May 1 in order to reenroll for the next year and that the Robisons did not pay Andrew’s tuition by that point. On May 6, the family informed Vandebilt Andrew would not be returning there for his senior year. The Robisons said at that time, Atwell indicated he would sign the transfer forms required by the LHSAA, provided Andrew did not transfer to area schools E.D. White or Terrebonne High School.

Robison alleges that from May 6 until the end of the school year, Atwell insisted Andrew meet with him every day for approximately one to three hours to discuss his future and during those meetings he encouraged Atwell to stay at Vandebilt. Their filing states Atwell bullied and tried to intimidate Andrew, allegedly saying he controlled his recruiting and would ruin his chances to play college football and that he called Robison “a low-character guy.”

According to the document, on May 15, Vandebilt supplied a transcript to the Robisons to give to Hahnville High to begin the enrollment process and that on the same day, the Robison’s put their house in Houma up for sale. Two days later, the family said they signed and executed a lease on an apartment within the HHS residential zone and that Andrew and his mother conducted an exit interview with Vandebilt Dean of Students Jason Daigle, where they informed Vandebilt Robison would be enrolling at HHS.

On or about May 16-17,” Andrew was informed he would be on the cover of a Louisiana High School magazine highlighting prep football standouts. On May 17, Robison apparently asked Atwell if he could wear his Vandebilt jersey for the May 20 photo shoot, and Atwell denied the request. The document states on May 18, the Robisons’ submitted all of the paperwork for formal enrollment to Hahnville. Robison apparently asked his friend Jha’Quan Jackson, a Hahnville senior football player, if he could get a Hahnville jersey for the shoot (Jackson was not named in the document, but was noted at Robison’s appeal hearing last week), a request that was granted.

Vandebilt filed three complaints accusing Robison and Hahnville of LHSAA rule violations in mid-August, alleging the Robisons failed to make a “bona fide move” pursuant to LHSAA rules — in this case, defined as abandonment of a former home in favor of a permanent move into a new residence — and noted a belief the Robisons were maintaining dual residences. A claim in the document is that Gueldner submitted a picture for evidence to support his allegations, but that the photo was taken with the “sold sign” in the front yard out of view and that he did not mention the Robisons were loading their trailer in the picture with boxes they were moving out of the house.

Vandebilt claims against Hahnville were that the school committed multiple violations including the issuing of a team jersey while Robison was still a student at Vandebilt, an invitation to the school’s spring game and a tour of facilities. The court petition claimed those assertions intentionally ignored proper context, such as that the spring game was a public event advertised and open to the public and that Vandebilt had already acknowledged his move to Hahnville before the alleged transgressions.

Vandebilt also alleged Saltaformaggio stated during an interview with FOX 8 that conversations surrounding the transfer began in March. Saltaformaggio told LHSAA investigators he meant to say May, according to the document which went on to claim there is no evidence that anyone at Hahnville had discussions with Robison prior to his father being fired on May 1.

Robison’s counter to the LHSAA and Vandebilt Catholic’s argument that the jersey was an inducement and violation of recruiting rules was “absurd” and that Robison’s exit interview, enrollment papers submission and withdrawal from Vandebilt had all begun days prior to the photo shoot, which was for a magazine that would not be published until August.

Last week, a temporary restraining order was granted to Robison that made him eligible to play in last Friday’s Hahnville/Destrehan football game. But Hahnville elected to hold him out of the contest with concerns about further LHSAA sanctions.

The TRO was to expire Wednesday (9/26), when the matter was to be furthered in court, but that court date has been pushed to Monday. The TRO is thus extended until Monday, meaning Robison would again be legally eligible to play this week – but that still seems unlikely, given HHS’ careful approach to the same situation last week.

UPDATE: After an apparent rejection by the Louisiana High School Athletic Association on Friday (Sept. 28) of a proposal that would potentially bring the saga of ineligible Hahnville senior quarterback Andrew Robison to an end, St. Charles Parish Public Schools stated it would officially shift its focus and efforts to third-party arbitration.

“We have reached out to the LHSAA multiple times in an attempt to resolve this matter in the best interest of everyone involved, most importantly Andrew and the HHS football team,” said SCPPS spokeswoman Stevie Crovetto through a statement released Friday afternoon. “Unfortunately, the LHSAA executive committee rejected an agreement today that was proposed by all parties. Hahnville High School is moving forward with arbitration and a claim has been filed. At this point, we are waiting to hear back from a claim manager with the American Arbitration Association.”

Hahnville head football coach Nick Saltaformaggio gave his own statement, through which he said, “We were hoping for a different outcome today. I am hurting for our team and our school. We have been on an emotional rollercoaster these past few weeks and were hopeful that this matter would have been resolved today.”

Dolena “Doll” Annette Matherne Robert, a native of Des Allemands, and resident of Ama, Louisiana passed away on Thursday, January 6th, 2022 at the age of 87. Doll was born April 6th, 1934 to the […]

Quartet delivers familiar sound in a different package, in Luling for concert

“Where Bach meets Bon Jovi” may seem like an odd fit, but for violist Ian Zanca and his fellow Dallas String Quartet musicians – and the millions who have enjoyed their performances – it strikes just the right note. […]

Students from several St. Charles Parish Public Schools were the beneficiaries of free uniforms and hygiene kits thanks to the Junior Achievement of Greater New Orleans. […]