He was lost as could be a few short weeks ago, but one-year-old pup Andouille LeRoux Abshire has a new, loving home.

Kevin Abshire of Norco was out early on a late September morning at the Bonnet Carre Spillway when he felt something bumping against his leg.

“It freaked him out,” said his wife, Jessica Abshire. “He turned around and it was a dog.”

Unique about this case was the fact Andouille – who was not yet named – was well-groomed, trained and seemed well-taken care of, so he seemed unlikely to be a random stray. Even more certain, however, was that the puppy wasn’t best left on its own out there. He had been eating left over chicken necks and shrimp bait, and had string hanging out of his mouth. 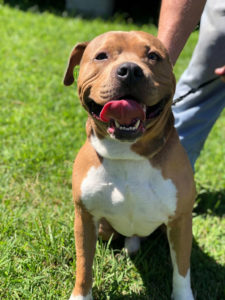 im. So (Kevin) knew he couldn’t just leave him out there.”

Kevin went to the fishermen out by the Spillway to ask if the dog belonged to them, but nobody would claim him. Jessica called a coworker for advice, which turned out to be to enlist the St. Charles Parish Animal Shelter to help find Andouille’s owner. But being it was on the weekend, the shelter wouldn’t be available until Monday, so the Abshires had a temporary house guest.

“That was the first mistake,” Jessica said with a laugh. “We fell in love with him immediately.”

They were nevertheless determined to find Andouille’s owner. Jessica posted on Facebook, both on her page and in several groups, the dog’s photo and a request for anyone who has lost their pet, or who knew someone who had, to take note. Those posts were shared more than 2,000 times across the state – but no dice. 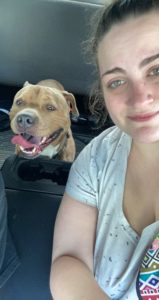 “We spoke with two prospective owners who had dogs who looked like him, but once we got in touch they confirmed neither was him,” Jessica said. “That was really upsetting, because we were really pushing to get him back to his home…2,000 shares is a lot. So for nobody to say, ‘This is my dog,’ is surprising … we’d go back to the Spillway but nobody was out there looking.”

The animal shelter sent a mobile medical unit to the Abshires’ home to vaccinate and microchip Andouille, who had not been chipped already, and to test and administer preventative treatment for heartworms and fleas.

The puppy was medically cleared. After five days, if nobody came forward to claim him, he would go up for adoption. In the meantime, the Abshires would foster him.

As was the case before, nobody claimed Andouille. But as the days rolled off the calendar, both Jessica and Kevin began to get a bit antsy. Andouille was making fast friends with the couple’s two children and three dogs.

“We’d say, ‘we can’t give him up!’ He loves us. He loves the kids. The kids love him,” said Jessica. “And he keeps our other dogs active. He’s just a puppy, and they’re 17, 13 and 10. When they finally put his picture on the adoption website, my heart dropped.

“We put in an application right there. We just couldn’t bear to let him go.”

They named him Andouille LeRoux, the first part of the name because it sounded right, and the second inspired by she and her husband’s love of Phantom of the Opera, the novel written by Gaston Leroux. 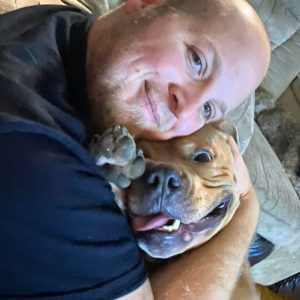 “The two names went so adorable together,” Jessica said.

While the stereotype of pit bulls casts them as aggressive and mean, Andouille is anything but. He’s friendly, walks up to introduce himself to new friends and happily will nap under your feet.

He’s even a bit of a scaredy cat.

“He’s afraid of the dark, which I’ve never seen before,” Jessica said. “He loves to cuddle. The kids go up to him and say ‘Hey, Dewey, Dewey.’ My little chihuahua is way more aggressive than he could ever be.”

It’s not the first rescue of sorts for Jessica, whose 13-year-old pug was going to be euthanized before she made a trip to Arkansas to adopt him. She’s always loved animals and adoption has a special place in her heart – her stepmother ran an animal shelter as Jessica grew up and her mother-in-law ran one until recently. 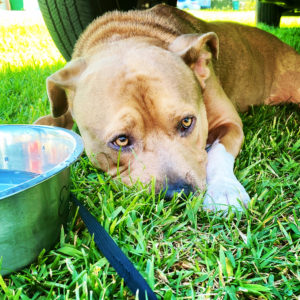 She’s happy to do so again with this pit bull. While she doesn’t believe Andouille would have lasted long at the shelter before finding adoption, she says pit bulls as a whole can have a tough time finding a new home, particularly after growing up.

“Pit bulls kind of get discriminated against, but they’re really such wonderful creatures,” she said. “Those are the main types of dogs you find in a shelter, and they can go for a long time because people think the worst of them and it’s anything but.”