‘My parents and brother are dead’

When the nine-year-old girl next door ran out of her house and crouched in fear behind a truck in the driveway, a neighbor asked her what was wrong and she replied, “My parents and brother are dead.”

It was around 6 p.m. Sunday when the residents of this quiet Paradis community on Lynn Drive say they learned 15-year-old Seth Veillon had been shot to death, allegedly by his own father. His mother, Nicole Veillon, also received multiple gunshot wounds.

He is being held on $500,000 bond at Nelson Coleman Correctional Center in Killona.

Neighbor Denise Collins said it was her husband who spoke to the girl, Veillon’s daughter, when she told them about the shooting.

“I just seen the little girl come to the end of the drive and flag down a cop,” Collins said. A police car had just driven up to the street and the girl directed deputies to her home at 136 Lynn Drive.

Another neighbor took the girl in to avoid her seeing the body of her brother in the house.

Collins said the coroner arrived later that evening and investigators remained at the scene until around 1 a.m. and then removed the crime tape surrounding the house.

At the residence, Grimaldi said deputies found Seth and Nicole Veillon both on the floor with multiple gunshot wounds. Seth was pronounced dead at the scene and Nicole was taken to the hospital where she remained in critical condition as of Tuesday. The Veillons’ daughter fled the home during the incident and was unharmed. Ed Veillon was treated for minor injuries and taken into custody.

Nicole Veillon, a longtime member of the River Parishes Tourist Commission board of directors, was described as a cooperative, interested and involved member by Commission Executive Director Buddy Boe.

“Seth was a great student and well liked by many of his peers. We will come together as a Tiger Family and support one another during this difficult time.” – HHS Principal Brian Lumar

“She has represented St. Charles Parish for many years on the commission as the only member representative of the hotel industry,” Boe said. “I’ve spoken with every board member today and they send their deepest prayers to them in this tragedy.”

Boe said they intend to welcome her back with open arms when she returns to the board.

“Nicole is a kind and thoughtful soul,” he said. “She wanted to know where you were coming from as your were describing something. She is a genuinely nice individual to be with and be around.” 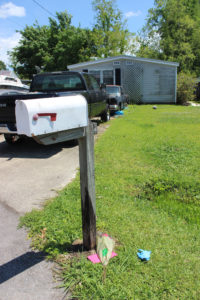 “We know this family well,” Oertling said “Theirs was a tragic event.”

Oertling said he attended church with the family at St. John the Baptist Catholic Church. He said they were active in the church and regularly attended mass.

“The oldest son went to Hahnville (High School) who I knew well and the youngest daughter was actually on my youngest daughter’s soccer team that I helped coach,” he said. “The event touched me, my family and many others in the community dearly and we felt compelled to help in any way we could.”

Oertling added, “I’ve always though pretty highly of the mom and kids. The little girl is a sweetheart.”

He did not know the father and didn’t recall seeing him with the mother and children.

“I think we all think this is a tragic event,” Oertling said.

“We are mourning the loss of one of our own students,” Lumar said. “Seth was a great student and well liked by many of his peers. We will come together as a Tiger Family and support one another during this difficult time. We ask that you keep his family and friends in your thoughts and prayers.”

To donate to the Gofundme set up for the family, visit www.gofundme.com/tragedy-in-paradis. The fund has already generated nearly $5,000 in donations.