For years, longtime NFL superstar and St. Rose native Ed Reed had a vision for his hometown.

That vision is about to become reality — plans are in the works to build Ed Reed Park in St. Rose, near the neighborhoods of Turtle Creek and Preston Hollow where Reed, now retired from the NFL, grew up. His motivation for the project is his desire to give children a place to go and play, be healthy and stay active and out of trouble.

The park will be a state-of-the-art multipurpose youth sports facility that will serve as a symbol of hope and healthy choices for children, according to the Ed Reed Foundation.

It will be built on land acquired by the Reed Foundation in the St. Rose area and will include a large 40×100 yard multipurpose turf field, two basketball courts, a playground for children, an open area for picnics and cookouts and a parking lot.

The park is already in the works, said Ed Reed Foundation Director Glenn Younes, and he said the hope is it will be ready and available this year.

“We’ve acquired the land, completed elevation study, soil testing and engineering site plans,” Younes said. “St. Charles Parish is on board helping and we are very excited about providing the community with this public park.”

The park’s construction will be a collaborative effort between the Ed Reed Foundation, fundraising efforts, St. Charles Parish and other organizations.

Younes said that Reed has felt a park was a need for his childhood community after its old park was eliminated and houses built in its stead. Specifically, the need is for access to safe facilities and positive programs, mentors and coaches.

Reed and the foundation hope to use sports as a hook to turn youths toward the path of fulfilling their potential in life and learning discipline and self-respect. 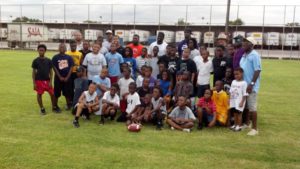 “We understand that a picture perfect athletic field holds a magical attraction, especially for the kids our programs are designed to reach,” according to the Reed Foundation’s webpage.

The foundation also cites the hours between 3 p.m. and 6 p.m. as unsupervised time for many young people and that self-care and boredom can increase the chance they will experiment with drugs and alcohol by nearly 50 percent. The site lists demographics of the community, estimating that more than 9,800 youths enrolled in St. Charles Parish Public Schools can be classified as “at-risk,” with 50 percent of that number eligible for free or reduced-price lunch programs.

“We feel sports can be a way to give children that outlet to greatness in life, a physical and mental distraction for the negative things that might be going on,” Younes said. “We hope this becomes the home for children and adults alike to enjoy health, wellness, family and community.”

He said the park will be open to public youth organizations, schools and the community to use.

Reed, 39, retired from the NFL after his final season in 2013, earning several major honors and setting many records. The Destrehan High School alumnus is a former NFL Defensive Player of the Year who helped propel the Baltimore Ravens to a Super Bowl championship and the Miami Hurricanes to an NCAA championship. He is set to be inducted into the College Football Hall of Fame later this year, and is expected to be an inductee into the NFL Hall once eligible.

After assessing and cleaning up after Hurricane Ida, various parks throughout the parish have been reopened by the Department of Parks and Recreation. […]

Destrehan closes out rivalry win over Hahnville before an energized crowd

Tuesday may have marked the start of the Major League Baseball playoffs, but elsewhere in Paradis, Destrehan’s Ryley Boyne proved to be quite the closer on the volleyball floor.   Boyne slammed down three consecutive kills […]

Art has always been a passion for 17-year-old Ashley Quintero, and now the Destrehan High School senior is using her artistic abilities to help her community recover from Hurricane Ida. […]