Though Today’s Car Care recently moved down the road into its new Luling location and opened its brand new on-site collision center, it has certainly not left behind any of the services its customers have come to expect over the years.

A good share of attention has been garnered by the addition of the collision center, but Bailie Bourg of Today’s Car Care said the services provided by it are just that — an addition.

“We’ve had some people ask us if we’re still doing the same things on the mechanical side, and we absolutely are,” Bourg said. “We’re still doing tires, oil changes, suspension, brakes, A/C … it’s everything we did before, but now also collision.”

Bourg said the goal of moving into the new location — and larger building — was to allow the business to provide a true one-stop shop providing for all its customers’ needs.

“We want everyone to know they can get absolutely everything they need here,” Bourg said.

So far, Bourg said, it’s done exactly that. Additional parking has been added for customers, while, the additional workspace provides for more efficiency and a fluid workflow. That’s shown in the quick turnaround times the shop has been providing its customers.

“Most of the time, it’s same day service,” Bourg said. “Even for bigger jobs, it’s usually one day, and that sets us apart … we know people can’t afford to be without their car for days and days.” 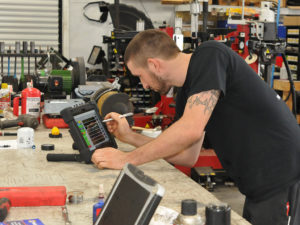 Though Today’s Car Care has moved just two miles down Hwy. 90 from its previous location in Boutte, it’s added convenience for customers who live in  nearby neighborhoods in the Mimosa and Luling area.

“Customers have been able to drop their cars off and walk or bike home,” Bourg said. “It’s been nice to see things like that … we think it’s working out really well. They seem to love where it is in the neighborhood.”

Something else that has remained constant is the quality and stability of the shop’s staff, Bourg noting the majority of which have been with Today’s Car Care long term. She said that’s not by accident, as the business puts a high priority on offering strong benefits and quality work conditions.

The resulting longevity means that for regular customers, Bourg said, nobody knows their vehicles better.

“To have someone that knows your car, that only helps it last longer … for some of these work trucks, especially, you might have 300,000 or 400,000 miles on it, and knowing the vehicle’s history so well goes a long way to keeping it going,” Bourg said. “(Purchasing one) is so expensive, so you want to get as much out of them as you can.”

For those seeking new tires, though Today’s Car Care primarily carries Bridgestone and Firestone, it has quick access to all brands of tires, and an order will typically arrive either the same or the next day.

A local Hahnville family will grace the small screen this week when their episode of a reality show airs. […]