Ray Harmeyer smiled as he recollected stories of many of his students over the 26 years he taught karate in Luling, a run that came to an end last month.

“It’s been a lot of fun,” Harmeyer said.

The veteran instructor and St. Rose resident closed the doors of his Tiger Rock Martial Arts school last month, stepping away for health-related reasons, and he says he’s not sure what he’s going to do with himself after years of working with his students. 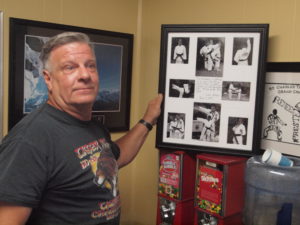 Harmeyer has taught eight different students who have gone on to earn World Championship honors in competition, and he’s quite proud of each one of them. But one thing that’s apparent when Harmeyer speaks is that as much as he’s loved working with those and all of his other students in class, what brings him far more joy is seeing the success they’ve found outside the world of karate.

“I’ve never looked at this as an enterprise where I’d make a lot of money … I looked at it as a place I could make a difference in people’s lives and teach them life skills,” Harmeyer said. “To be a personal development coach to these students, both young ones and adults.”

One thing Harmeyer always focused on for his younger students was grades. He asked his students to routinely bring their report cards to class to offer positive reinforcement to those making the grades, as well as to motivate those who weren’t to push themselves in the classroom. The discipline he hoped to instill in his students through martial arts extended far beyond the sparring mat.

“I always tell my students the three most important things are education, education and education,” Harmeyer said. “The world is so competitive now, be it in applying to college or going into the job market.”

He recalled one young student who suffered from low self-confidence when he began years ago — “He wouldn’t look you in the face. I always told him to keep his head up,” Harmeyer said — and was suffering in school, making Ds and Fs.

Recently, that boy’s grandmother texted Harmeyer a photo and asked if he remembered her now teenage grandson — and she offered an update.

“He’s in Beta Club, he’s the captain of his baseball team that won its regional championship, and he’s thriving,” Harmeyer said, also noting two other former students he recently heard from who are 4.0 students and doing great things in college. “And it’s things like that that happen over and over again. I hope I was even some small part in him finding himself and his success. I always tried to teach these kids there’s nothing you can’t accomplish.”

Another former student who has made the coach proud was a boy suffering from autism. Harmeyer said the boy was exceptionally intelligent, but struggled mightily early on when it came to learning his moves.

“He was so, so, so smart. He would sit in that chair and talk to you just like an adult would,” Harmeyer said. “But I’d show him two moves, it could be 50 times, and he couldn’t get it down.”

The boy’s father spoke with Harmeyer and had a special request.

“He told me he wanted his boy to get his black belt, and that if I didn’t give up on him, he wouldn’t let his son give up,” Harmeyer said. “He’d come in after our last class and we’d get to work.”

The coach put numbered footprints on the floor to give his student a visual, and it sparked the boy — he learned every form from there and went on to earn his black belt.

There are adults, too, who Harmeyer is proud to say have done some extraordinary things. After bringing her son to classes, a blind woman decided she’d like to try her own hand at learning the art of self-defense.

“She had 52 eye surgeries. She sparred, did all her forms, anything any other student would be asked to do,” Harmeyer said. “I’d stand next to her like a shadow and taught her. She had that disability, but that was the only disability she had. Working with her was something special and she earned her black belt.”

It was quite a run for a man who never planned to be an instructor at first. He got involved with the sport after enrolling his son into classes, and he soon began attending the classes as a student himself.

“I was a runner and I thought I was in pretty good shape,” Harmeyer said. “I found out that my body was not prepared or accustomed to any of her workout. My body hurt so bad the next morning that the hair on my arms hurt.”

He also established a habit of helping his fellow students pick up and perform their exercises properly. His instructor noticed and told him he could make a pretty good instructor if he pursued it. In 1992, he earned his instructor certificate, and he’s been teaching his students ever since and preparing them — both for competition and for life.

“I hope later on they look on me as I’ve looked upon my mentors in my life as more than just a karate instructor,” he said. “It’s about much more than punching and kicking.”