Now a news producer for KATC-TV in Lafayette, Jordan Reid of Luling keeps her viewers informed and up-to-date. But recently, she received recognition for using her skills to another end: to make them laugh.

The recent graduate of Southeastern Louisiana University produced “College Night” while attending the school, and she and her fellow creative minds behind the show saw it named “Best Comedy Video” in the nation by College Broadcasters Inc., a national organization serving students and advisers of college and high school media outlets, at the group’s 2019 National Student Production Awards event.

The show was one of four SLU productions to place top four in a category, including Reid’s fellow Luling student Freddie Rosario, whose “The Big Game” broadcast placed third for “Best Sportscast Video.” Both shows were broadcast on the school’s “Southeastern Channel.”

“We all looked at it as a great opportunity,” said Reid of College Night. “We had shot some short films, but we didn’t have many hands-on filming classes or things that gave people complete freedom to do what they wanted. It was a chance for people to bring their ideas to life. We were able to put more personality into a show like this, in my opinion, than other things we were producing.”

Reid admits she wouldn’t describe herself as “funny,” but said her collaborators more than made up for that — and made creating the show a blast.

“I never considered myself a funny person, but I know a lot of funny people,” she mused. “And we were always laughing while trying to get everything done. It was serious work, but at the same time we could relax … a lot of the creative process was hanging out, coming up with ideas, and then you want to go film them, so it wasn’t the kind of work that you had to drag yourself to go do.”

She described College Night’s format as a Saturday Night Live-esque skit show. Typically, she said the aim was to produce one or two College Night videos a semester.

In doing so, they brought a concept that had been somewhat abandoned back to life. College Night was a show produced “a few years back,” Reid said, but the idea was dormant before some inspiration struck.

“One of my friends at the channel kind of picked it back up and did a Halloween Special edition of it,” Reid said. “It motivated people to want to do that kind of film stuff again. We had a lot of people really into writing, and they’d give me a script. From there we’d pick out what segments go in the show. They’d pitch who they want to work with … talking to them and, for me, visualizing their ideas, it was incredibly fun to have a hand in making all of it come to life.”

The show was made in the free time of a group of students with diverse tastes and interests, which Reid believes helped make the end product what it was.

“There’s a little something for everyone with it,” Reid said. “While we don’t have many common interests that everyone in the group shared, (the differences) really helped us create some great stuff.”

“It was a chance for people to bring their ideas to life.” – Jordan Reid

When she learned of the honor, she said it took her off guard — after graduating in the spring, she hadn’t thought of it much, with her focus turned to her current duties at KATC. She stopped short of saying it was a surprise, though, noting the talented group she called herself lucky to work with.

While at Southeastern, Reid was the president of the University’s chapter of the Broadcast Education Association.

A Hahnville High School alumnus, Reid said her experience at the Satellite Center is something she’s grateful for, because the hands-on duties she took part in allowed her to have skills and confidence established in those areas and to focus on learning and improving on new aspects introduced in college.

“Getting that experience of working cameras or being a part of putting on the live sporting event broadcasts (at the Satellite Center), it made it so a lot of what I had in college came as a refresher,” Reid said. “I could focus on getting better at writing or things I maybe wasn’t as good at, because I didn’t have to worry too much about how to work the camera or audio. I could be confident in that from what I did in high school.” 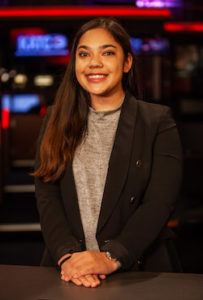 Suspects are innocent until proved guilty in a court of law. Arrests Dale Lirette Jr., 31, of 2414 Highway 1 in Raceland, was arrested May 5 and charged with obstruction of justice, reckless operation without […]