Macie Barrios did not have the greatest first impression of Germany upon her arrival.

To say the least.

“I got lost on the train … I asked this guy who worked there for directions,” Barrios said. “He told me, ‘You can stay in a hostel or at my house.’ I started crying, just sitting on the floor inside this little train crying non-stop, with a lot of people staring at me. I didn’t have Wi-Fi to text anyone … it was a mess.”

She traveled there last summer to attend the International Performing Arts Institute (IPAI) for musical theatre after earning a spot through an audition during her senior year of college at Northwestern State.

Thankfully for the Luling native, her experience abroad improved exponentially from that first day, ultimately blossoming into a fun, worthwhile and ultimately very valuable experience for the budding stage performer.

Barrios, 22, began acting on stage in the fifth grade, recalling her first-ever role taking place in a production of Jabberwocky, a musical based on the English poem of the same name by Lewis Carroll.

“I dropped it at first. I thought that was it,” Barrios said. “My classmates were laughing … I went back to it though. I had a little voice telling me this was what I was supposed to do.”

She developed her love for performing on stage from there. But there was one aspect of her work on stage she’s long had reservations about: her singing, which she never felt fully confident in. Barrios said lacking full confidence in that ability hindered her at times, as it can be difficult to immerse yourself in a character while focusing so much on the technical aspects of singing.

In Germany, she found her voice.

“My voice is kind of childlike,” Barrios said, noting Kristin Chenoweth as a stylistic comparison. “For a long time, I think I was encouraged to create a more mature sound, but I really have to kind of step into that childlike voice. My teacher (with the Institute) was so helpful and everyone there was so supportive. It kind of helped me realize that I can sing.”

Once the Hahnville High School alum began building that confidence, it became easier to connect that part of the stage to those she’s most comfortable in.

“It wasn’t so different from a monologue, and so it wasn’t that difficult to adapt to it (at that point),” Barrios said. “For me, it took a long time to kind of put it together. You go up there, sing a song and kind of work through it … finding how to connect to your piece. I struggled with how to act while singing for a long time, it was the hardest concept for me … this helped me out a lot.”

She learned of the chance to audition for IPAI during her freshman year at Northwestern State, but didn’t feel like she was ready to take that step. Ditto for the next two years, but in her senior year, she took the leap. 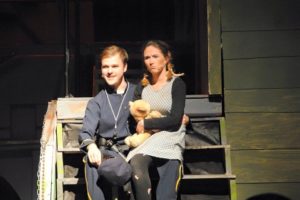 She attended the intensive program for a 22-day period, with each day’s work beginning at approximately 9 a.m. and ending at 9 p.m. (with appropriate breaks). In that time, students would attend choreography, acting and movement classes; rehearsal; take language lessons in German; and work with a voice coach for lessons, among other activities.

The days were busy, but Barrios enjoyed the work and the company of her peers, who she found much more pleasant than her day one fare.

“They were adjusting to the same things and we kind of got to tackle those things together,” Barrios said. “They were all great and really supportive.”

During their off time, she and classmates got to go sightseeing, and not just in Germany, as they visited surrounding cities and even countries by train.

Back in Germany, of course there were still adjustments to make for day-to-day life. The language barrier could be tricky at times, Barrios admitted, and there was a bit of an overall culture shock to absorb.

“They’re very serious people,” she said with a laugh. “They seem to kind of think if you’re smiling at them, you’re up to something. I smile at everybody (back home), but they were looking at me like I was crazy.

“You kind of have to rely on strangers because so much is unfamiliar, and that can be scary. But honestly, after my first day, crying on a public transport in a different country … it kind of really makes you stop caring about what anyone thinks of you. That was pretty empowering, in a way.”

Ideally, she hopes to one day work in the film industry, though Barrios said she’s not 100 percent set on any one path. Acting is her passion, though, and one she continues to refine.

“Just the impact you can have on other people … my two nieces saw me on stage when I was in high school, then went on to take up talented theatre,” she said. “Inspiring others to make art is a very big motivator for me. It always makes me feel good.”

For senior students at Destrehan and Hahnville high schools, it seems it will be better late than never. […]

Bayer to pay 10.9 billion to settle lawsuits over weedkiller

Bayer will pay up to $10.9 billion to settle a lawsuit over claims the weedkiller Roundup, a herbicide product of its subsidiary company Monsanto, caused cancer. […]