Gathered outside the St. Charles Parish Professional Learning Center, children were having a snowball break and discussing what they had learned in the School District’s first youth leadership program for middle school students. 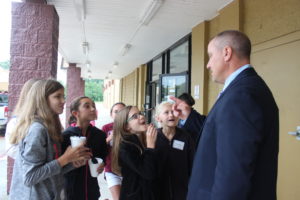 “I learned that self awareness is to know your strengths and weaknesses so you can become a better person,” said Ashlyn Rogers, 11, of Luling. She is going to J.B. Martin Middle School when school starts in August.

Rogers also recounted learning that it’s good to be spontaneous in life rather than always having things planned.

Macy Oertling of Bayou Gauche, who also is headed to J.B. Martin school, shared her lessons.

“I learned, to be a good leader, you have to listen more than you speak,” said the 12-year-old. Oertling also noted that a characteristic of a good leader is being humble.

Stasia Cross of St. Rose said she learned about what’s important – one of those things is her grades. She added, “I learned that I have to work on my communication skills.”

They were among 45 students chosen for a one-day leadership seminar called LEADS (Leadership Education and Development Seminar) for students entering grades 5 – 8 held at the Luling center. The seminar focused on fundamental leadership skills such as communication, time management, and self-awareness as well as students identifying leadership qualities they would like to develop within themselves.

They were chosen from more than 150 applicants for this opportunity. 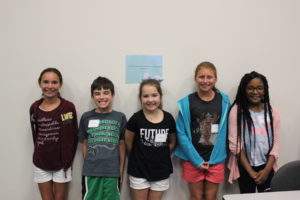 The number was limited because it was a first-year activity, but Ken Oertling, the school district’s executive director of Secondary Schools, said the program was such a success that more students will be accepted next year.

“We plan to follow up with these students throughout the school year to support them in their growth as leaders,” Oertling said. “Additionally, we plan to expand the program next year. As a district, we feel charged with providing middle level students with the knowledge and skills necessary to become independent learners and leaders that will help them compete globally as responsible, productive citizens and lifelong learners.”

Oertling said teacher Johnel Robinson approached him about the idea of the seminar.

“I learned that self awareness is to know your strengths and weaknesses so you can become a better person.” – Ashlyn Rogers

“We brainstormed how it would work and who it would serve,” he said. “In looking at the many programs we offer, there wasn’t one specifically on leadership for middle level students.”

On the timing of the seminar, Oertling said students at this age are developing a sense of who they are. 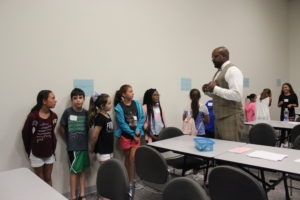 “Offering this seminar is important, because we feel as though building leadership helps students become self-aware of who they are and what drives them it also builds a level of responsibility, a growth mindset, and self-efficacy along with communication and management skills, he said. “These are transition years for they become better learners who are aware of their impact on others and will hopefully lead to more responsible students in our schools and citizens within our community.”

As an example of the seminar’s impact, Oertling recounted a fifth-grade group that listed 20 things they thought were very important to them and then had to narrow them down to just three.

“By the end, most had picked close family members and described how they influenced their lives,” he said. “They drew the connection between leadership and relationships, and how leading is built on the foundation of positive relationships.”

Hahnville’s back was against the wall Friday night at home against rival Destrehan, which surged early in the second half to take a 44-31 lead. […]

Students in the St. Charles Parish Public Schools’ Head Start program have a colorful and delicious addition to their curriculum this year – the We Inspire Smart Eating (WISE) program. […]