Hundreds are planned to march through St. Charles Parish in the reenactment of the German Coast Uprising of 1811, the largest rebellion of enslaved people in U.S. history.

The reenactment is a community-engaged artist performance and film production that, on Nov. 8 – 9, will reimagine the uprising. They will march for 26 miles over two days.

“We will animate a suppressed history of people with an audacious plan to organize and seize Orleans Territory, to fight not just for their own emancipation, but to end slavery,” said artist Dread Scott. “It is a project about freedom.”

Scott envisioned and organized the event, which will be documented by filmmaker John Akomfrah.

The march will begin in St. John Parish, go through parts of St. Charles Parish into New Orleans, and conclude at Congo Square.

“The first significant research on the rebellion, states, ‘This ‘light infantry’ of Africans and some native people had swelled to many times its initial size. They cut across the plantation of Widow Jean Barre Trepagnier and Francois Delhomme (the former encompassing what is now the town of Montz, La., about 30 miles above New Orleans).” Scott said. 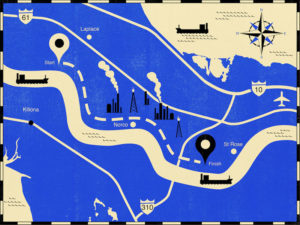 The revolt occurred Jan. 8 – 10, 1811 on the east bank of the Mississippi River in what is now St. John the Baptist, St. Charles and Jefferson parishes. An estimated 200 to 500 slaves, armed mostly with hand tools, participated in the march where they reportedly burned five plantation houses, several sugar houses and crops. A militia was formed that confronted them, resulting in interrogating, executing and decapitating slaves who were captured.

“What if it succeeded in establishing an African republic on what was then Orleans Territory? And how people think of the past has everything to do with how they think of the present and what they can imagine for the future.”

Reenactors will dress in period clothing and march for two days along the route.

“The reenactment will be an impressive and startling sight with hundreds of black reenactors, many on horses, flags flying, in 19th-century French colonial garments, singing in Creole and English to African drumming,” he said.

Because there was limited fighting in the revolt, much of the event will be a procession with occasional skirmishes, Scott said.

“Charles Deslondes, Gilbert, Quamana, Jeesamine and Marie Rose, some of the leaders of the 1811 uprising, will be alongside the many enslaved people who were part of the revolt,” he said.

At Congo Square, a location instrumental for preserving African culture in America, there will be a celebration – “transforming the violent suppression of the freedom fighters into a celebration of their achievement,” Scott said.

He added, “The Slave Rebellion Reenactment will continue the original rebels’ vision of emancipation that is embodied throughout the performance and will open the possibility for participants and audience members to imagine freedom.”