Parish officials attended the Feb. 22 signing ceremony, partnering with the Louisiana Coastal Protection and Restoration Authority (CPRA), two other parishes and the U.S. Army Corps of Engineers (USACE) for the West Shore Levee Project at the Pontchartrain Levee District (PLD) Board Office in Lutcher.

The signing marked the start of the engineering and design phase of the levee project, which entails an estimated 18 miles of earthen levees and floodwalls, one mile of which will be located in St. Charles Parish.

For the parish, it represents a section that Cochran calls “a very critical mile” that will start the levee project and extend it into St. John the Baptist and St. James parishes.

“We’ll see results immediately,” Cochran said of benefits for Montz. “With the storms we’ve had in the past, Montz has received Lake Ponchartrain waters. They were flooded for days,” he said of Hurricane Isaac’s impact.

Plans are to bid out the first phase of the work in October 2020.

Cochran said the project’s advantages also include lower flood insurance rates, which were made higher by FEMA not recognizing the Mississippi River as separating the parish.

“That’s why it’s critical we can realize lower flood rates parishwide,” he said. “Along with the West Bank levee, that is what we’ll realize.”

Cochran said the three parishes working in unison along with the parish’s Congressional delegation achieved the milestone agreement with the help of the PLD. 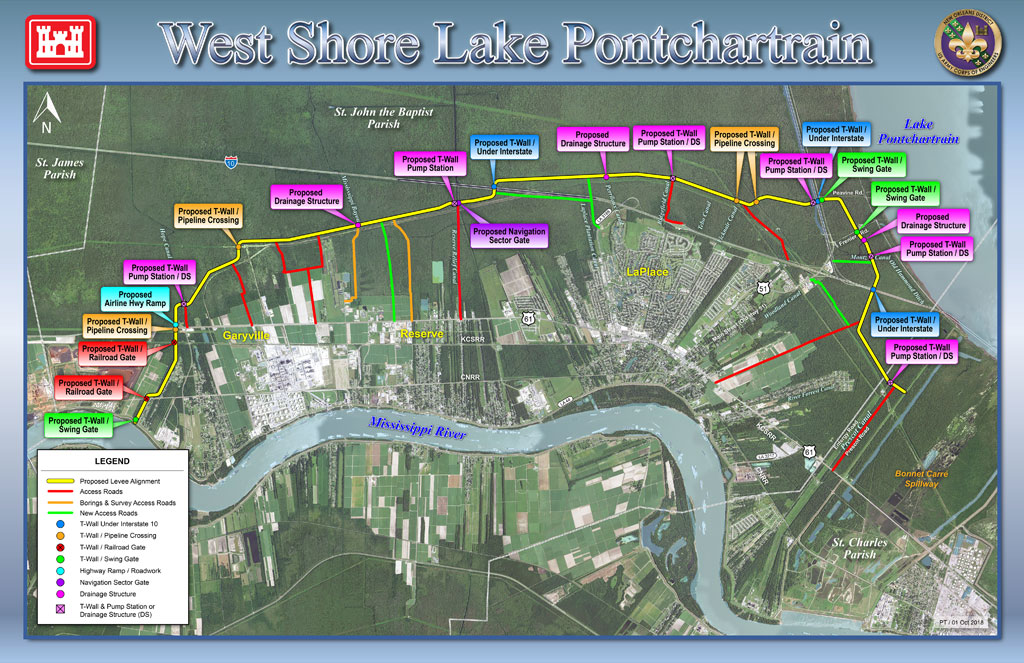 “Everything fell into place in Washington,” he said. “And having Congressman Garret Graves and our delegation moving it forward, we were able to achieve this. It’s been a lot of work.”

Cochran also called it a significant development in overall protection.

“It’s exactly what we’re hoping for the East Bank to bring us 100-year protection,” he said.

According to CPRA, $760 million in federal funds have been allocated through the Bipartisan Budget Act of 2018, which was signed into law on Feb. 9 of last year. CPRA’s Executive Director Bren Haase also emphasized the project is part of a larger plan to help reduce risk and improve resiliency for the region.

Gov. John Bel Edwards said getting to the point of agreement was not an easy task.

“But it’s because of the hard work of the people here today that we were finally able to make it happen,” Edwards said. “Flood protection and infrastructure is important to any community and this project increases protection for 60,000 homes.”

The governor said the Coastal Master Plan called for this large-scale hurricane protection project, and now that funding is in place they are  wasting no time in moving it forward.

“We have 60,000 people who will benefit by having their homes, families, jobs and communities better protected from the increasing threat of tropical storm surge,” Edwards said. “Hurricane Isaac flooded about 7,000 homes in this region, and emergency services, recovery efforts and commerce were hindered by having I-10 flooded for several days. Once this $760 million project is completed, we hope never to see that kind of suffering again.”