Chandra Gaudet began to experience flu-like symptoms just days after Governor John Bel Edwards closed public schools due to the coronavirus pandemic. The 50-year-old Norco resident, who works at Destrehan’s East Bank Head Start School, had no idea of the harrowing journey ahead – what started as a month off work quickly turned into a fight for her life.

Gaudet went to the doctor on March 18 when she started feeling ill. She tested negative for the flu, was told she had a stomach virus and was prescribed anti-nausea medicine. When she still wasn’t feeling well four days later, her doctor suggested she get tested for coronavirus.

At the time, her symptoms included fatigue, weakness, no appetite, no sense of smell and losing her ability to taste food.

After the test, which provided no immediate result, Gaudet isolated herself in her bedroom at home and was taken care of by her 17-year-old daughter Mia.

“I was scared to go to sleep some nights because of not being able to breathe,” Gaudet said. “All I could do was cry and ask God to heal my body.”

As her symptoms progressed, she lost between one to two pounds daily.

“When I did go to the bathroom, no more than ten feet away, it felt as though I ran a five-mile race,” she said. “To take a shower was an overwhelming task … trying to stand for more than a minute meant I couldn’t catch my breath … I cried a lot because of the pain and just the thought of dying.”

On March 27 she was told her coronavirus test was positive.

“When I got the news that I tested positive I cried and wanted to give up because I was so tired,” Gaudet said. “Then I thought about my daughter, so the next day I started listening to gospel music and positive words of encouragement.” 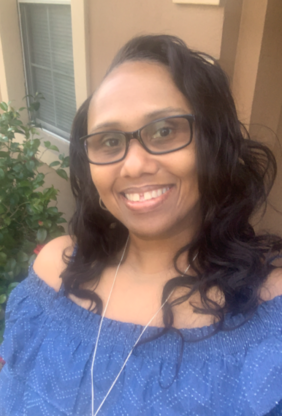 Gaudet suffers from Sjogren’s syndrome, an immune system disorder that in her case is treated with hydroxychloroquine. Gaudet continued to take the drug, which has been used experimentally on coronavirus patients, but said she felt as though it did little to fight the novel virus.

After one particularly uncomfortable night, Gaudet woke up and walked to the bathroom with no problem.

“I took a deep breath without coughing and I walked to the living room with no problem and all I could do was cry and thank God for saving me,” she said.

Unsure of where she contracted the virus, Gaudet said she is still not back to feeling like herself over a month after initial symptoms started. She has tried to start exercising again, something she did every day before the pandemic, but hasn’t regained enough energy to do so.

“I still don’t have my taste buds completely and my energy level is not back,” she said, “but thank God I survived.”

Life – and numerous heads of hair – returned a little bit more to normal last week as salons were allowed to reopen after forced coronavirus-related closures. […]

Jake Lemmon doesn’t remember much at all from the weeks following his serious auto accident last year. At the same time, he’ll never, ever forget. […]

About Monique Roth 80 Articles
Roth has both her undergraduate and graduate degree in journalism, which she has utilized in the past as an instructor at Southeastern Louisiana University and a reporter at various newspapers and online publications. She grew up in LaPlace, where she currently resides with her husband and three daughters.
Website