Some take their entire lives to find their passion. Others never do.

But for Tyler Dufrene, it didn’t take very long at all.

“Believe it or not, I’ve known I wanted to be a teacher since Pre-K,” said Dufrene, 26. “I loved school immediately.”

He’s become pretty darned good at it, too. Dufrene, who teaches physics and robotics at Hahnville High School, was named the state’s High School Teacher of the Year by LACUE (Louisiana Association of Computer Using Educators) for the year 2019, while he also earned the organization’s honor of Region I Secondary Teacher of the Year. Region I encompasses St. Charles, Jefferson, Orleans, Plaquemines and St. Bernard parishes.

Dufrene was actually at the eye doctor when he received the e-mail notifying him of the regional honor. He wouldn’t learn of the state honor until it was announced at the LACUE’s awards ceremony. He wasn’t sure he’d read the e-mail correctly.

“I thought, ‘OK, I’ve gotta read this again. I’m at the eye doctor, I missed something …  I didn’t believe it at first. Then another e-mail came through with more details and it’s, ‘Oh wow, is this real?’” Dufrene said. “It’s very humbling and I’m very appreciative. But I was definitely surprised on both counts.”

Dufrene was nominated by colleague Linda Thibodaux, a chemistry teacher at Hahnville. As robotics team sponsor, Dufrene helped the Tigers go further than ever in competition, reaching the quarterfinal round in the Robotics World Championship competition in Houston. Dufrene also communicated how he implemented technology into his classes at Hahnville and his helping to foster positive progress in the community through service outreach. 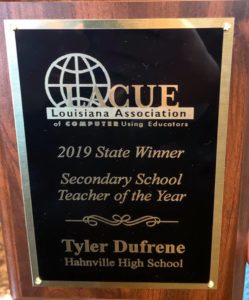 Dufrene has been a teacher at HHS for the past five years after making the jump from teaching math in Lafourche Parish. He started as a science and chemistry teacher at Hahnville.

“Something told me to make the jump and take that risk,” Dufrene said. “I fell in love with the job, and with science. I just felt I could do more through science than with math. It lends itself to experiments. I fell in love with it and ran with it.”

He said his philosophy on teaching students starts with helping his students connect with the subject matter. Ideally, the student learns because he or she have already started fostering interest in the day’s curriculum.

“I try to break things down into something they can relate to, whatever that may be, then go over it with them and guide them,” Dufrene said. “In this day and age, you can’t just think about a topic in one way. You have to be able to explore them from multiple perspectives. I encourage them to take educational risks through projects, inquiry-based labs … letting them explore their curiosities within the curriculum.”

So yes, while he is a robotics teacher, the goal is, in fact, to make the learning process feel less robotic.

But that can be easier said than done. Dufrene hardly pretends that the effective quirks he implements in his classes just pop into his head randomly. For him, being that teacher is largely about continuing to be a student.

It’s why he’s dove headfirst into professional development opportunities, both locally and out of state. In 2018, he traveled to Aberdeen, Maryland to take part in the Joint Science and Technology Institute, where he and 10 other teachers worked with scientists from the Department of Defense for two weeks, learning about STEM research and taking in new ideas. Ditto the National Science Teachers Association’s national conference that same year.

“If I go out and get that real world experience myself, it allows me to bring all of that back and share it with my students to make the experience that much better,” he said. “You get the chance to show there’s more to education, and life for that matter, than what you see in a textbook.”