Trip down Apple Street left quite an impression

Sal Digirolamo was in Norco Primary School when then U.S. President Franklin Delano Roosevelt (FDR) rolled down Apple Street in an open car.

“We all were lined up along the school fence when the president passed,” said the lifetime resident of Norco.

It was a historic moment for then youngster Sal, and one for the Bonnet Carre’ Spillway.

FDR was there to see the newly completed flood control project.

It was April 29, 1937, according to Bob Clark, supervisory archivist with the Franklin D. Roosevelt Presidential Library in Hyde Park, N.Y.

“FDR traveled by train to Biloxi, Miss., and then on to New Orleans prior to embarking on a fishing cruise in the Gulf of Mexico,” Clark told Digirolamo in response to his inquiry about the photo. “During his afternoon in the New Orleans area, FDR lunched in the French Quarter at Antoine’s, drove through the countryside with the governor to the Bonnet Carre’ Spillway on an inspection tour, then returned to the city where a city park was rededicated in FDR’s name and where he delivered some brief remarks before boarding the ship for the cruise.”

According to local history, FDR’s visit followed the earlier spillway dedication in December of 1935.

The project was completed in only 2-1/2 years.

The president was accompanied by Gov. Richard Laiche when they rode down the streets of Norco. In the open car, FDR was waving his hat with his characteristic broad smile.

The May 3 edition of the Shell Bulletin reported “his route was lined with waving school children and Norco and vicinity residents.

“He kept his hand raised high in greeting,” it states. “He inspected the spillway project thoroughly, spending fully 40 minutes on his tour.”

Built after the great flood of 1927, the spillway has made its own history, too. The recent opening is the first where it was opened in back-to-back years. The U.S. Army Corps of Engineers has started closing it as floodwaters recede.

But on that day in 1937, Josie Mire also recounted being among the children waving on FDR in Norco.

“I can remember seeing the president on Apple Street,” said Mire. “We were all lined up with our flags.” 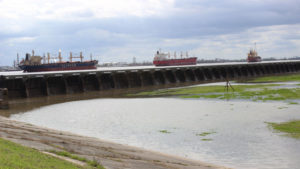 Louise Diest remembers her husband as a giver, a teacher, and a man who despite something of a gruff exterior, loved to help others become the best they can be. […]

Why wearing a tutu is every girl’s dream

Destrehan’s DeAnn Sullivan always wanted to learn how to make a classical tutu – from scratch – so she went to tutu school and it’s turned out to represent so much more than she anticipated. […]

Destrehan will attempt to move on to round two of the boys soccer postseason for the fourth time in five seasons Saturday as it hosts East Ascension at Wildcat Stadium, the teams kicking off the action at 3:30 p.m. […]