Even as a woman with very strong faith, the words Paula Rechen heard sounded too good to be true.

Rechen was just one week away from a trip to New York with her husband and 14-year-old son Grant, where Grant was set to undergo surgery – just the latest for a child who has had 16 procedures in his life – and learn his next steps in treatment to address a mass found in his brain. In November, doctors found it in an MRI after Grant began feeling ill and it was feared to be connected to the rare illness he’s battled in his life since he was just three months of age – Vein of Galen Malformation, a rare blood vessel abnormality.

So it would have been natural for the Rechens to fear the worst. But days prior to leaving, the family attended a special healing mass with their community at St. Anthony of Padua church in Luling, where  Father Anthony Odiong prayed over Grant, anointed him with oil and put Grant’s hands and head on the image of the Blessed Mother, Our Lady of Guadalupe, displayed at the church’s healing chapel.

“(Odiong) told me, ‘Grant is going to be healed,’” Rechen said. “Charlie Bush (a member of Odiong’s healing team) told me the same, that he would be healed. As a mother, you wish for that. You just don’t expect it.”

Understandably: after all, the family was told in November that the mass in Grant’s brain signified a progressive situation.

“We knew he’d have to have a procedure, and then we’re thinking of how many more he’ll need,” Rechen said. “What are the next steps? All of that.”

Only there were no steps to take.

Miraculously, the tumor was gone, and Grant received a clean bill of health.

“He went in for his angiogram. Within an hour, we heard from the doctor … he said, ‘there’s nothing else I need to do,’” Rechen recalled. “’The boy is healed.’ That’s what he said. ‘The boy is healed. You don’t have to come back anymore.’ And we felt like … ‘what?’”

Nobody was sure what caused the mass to grow again when an MRI revealed it. And nobody is completely sure how it disappeared.  Rechen does not hesitate when directing credit though.

Odiong brought the healing mass to the church in 2016 after joining the community as its pastor.  The church holds a healing mass on the final Thursday of each month, the relatively new tradition just starting up again earlier this year after a COVID-19 induced hiatus.

Many prayers came true with the news of Grant’s strong health.

“We all had Grant in our prayers leading up to them leaving,” said Kevin Robicheaux, a member of St. Anthony’s community. “We continued to pray for safe flight, good results and for the physicians, doctors, their staff … for Grant to come back home safe and in better condition. And he went up there … it basically became a trip to visit friends and family, because he didn’t need medical intervention after all. It’s amazing.”

Rechen fully believes her son is a miracle child, and she’s been given many reasons to embrace that idea.

Three years ago, Grant’s neurosurgeon said traditional treatment options had been exhausted and suggested an experimental radiation treatment that would hopefully cure the boy for good. It seemed to do exactly that, but when the mass was found to have returned in Grant’s brain late last year, the ensuing fears of the family were obvious. 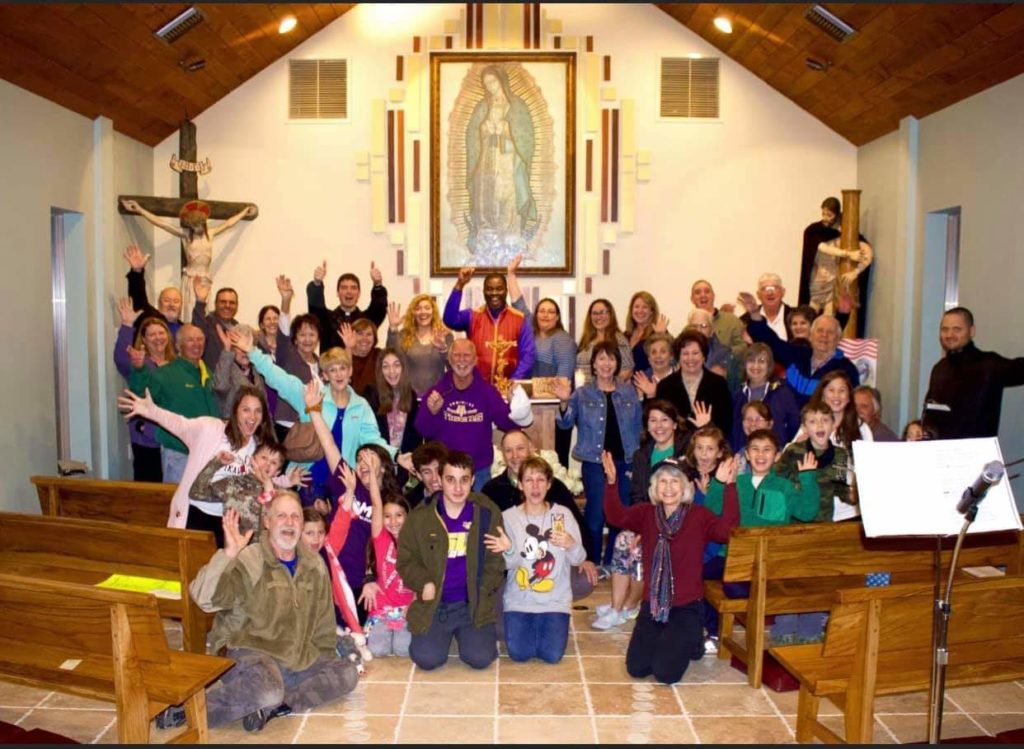 Those fears have been extinguished.

Those words also may have sounded too good to be true – maybe even more than those from Odiong and Bush a week prior.

For Grant, more than anyone.

“(After the angiogram) when we told Grant he was healed, he kind of teared up,” Rechen said. “It was like he couldn’t believe it … it was very emotional.

“He’s so happy now. He’s working on designing his own fishing lures. He loves to fish.”

The healing mass was also emotional. Rechen was able to watch Odiong and Grant pray together from a window outside of the chapel – the healing mass is held outdoors currently due to COVID-19 precautions, while Odiong brings those in need of his help into the chapel for the healing ceremony.

“He took Grant in … I was outside, and I just fell on my knees and tears started flowing. I felt the presence of Jesus and of the Blessed Mother … I felt love and I felt peace, so much of it, with a community of people around us praying. It’s almost unexplainable.”

Bush called that community “powerful,” and reiterated what he said to Rechen that night.

“We fully expect it. When we go to a healing service, we fully expect it,” Bush said. “We’ve seen it many times, so you have to go expecting it … having faith. We really expected him to be healed. And we’re very blessed to see it happen.

“The Rechens are wonderful folks and we are just so happy for him and for them.”

The healing mass itself is the culmination of a longer process.  Members of the approximately 30 member healing team hold a nine-day novena, reciting prayers with healing intention and fasting. The night prior to the mass, the group gathers and prays as a team.

On the day of, Odiong gives a homily and holds the mass before conducting the healing service in the chapel to conclude the evening.

“We’ve just accepted this miracle,” Rechen said. “We want to find a way to give back. Hopefully, other parents going through a difficult time, we can pray with them … we’re just so joyful. Our hearts are overflowing.”

In Destrehan’s first two matchups with St. Charles Catholic this season, the Ladycats took to extra innings to fell the Comets. On Friday, there were no extra frames, but late game heroics were needed all the same […]

Sheena Candies has fond memories of growing up in Des Allemands and attending the Catfish Festival every year. […]

by Gulf Engine & Equipment - 6 months ago