Citing illegal dumping and use of considerable resources, St. Charles Parish is doing a massive rehaul of its recycling dumpster program, as well as reconsidering curbside recycling.

Parish Contract Monitor Chandra Sampey told the council that the parish’s 19 recycling sites were being abused with items like furniture and large appliances to the point they will shut down 17 of them.

“People are just abusing the system is why we need the changes,” Sampey told the council at Monday’s meeting.

Sampey displayed photographs of some of them, where items were overflowing from dumpsters and larger items were piled around them in late night dumping. The problem worsened after holidays, and residents living near some sites started complaining and asked the dumpsters be removed.

“We just shut down the St. Rose site because their dumping was completely out of the ordinary,” she said. “The people are trying, but we have some who are committing recycling abuse.” 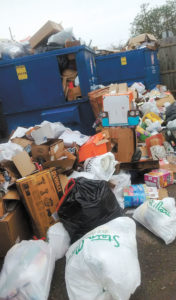 After hearing about the success of Terrebonne Parish’s 12-year-old program, Sampey said they went there to see the program and based on their findings they came up with a plan for St. Charles Parish.

They determined the public preferred safe, clean and well-lit locations so they are upgrading the East and West  bank parks with a 25-yard-long dumpster at each specially designed to limit items to recyclables, Sampey said. They will be better lit and surveillance cameras will be placed at the parks.

Sampey said the move will be accompanied by a public awareness campaign aimed at educating the public on recycling and changes with the parish’s recycling program.

Councilwoman Julia Fisher-Perrier asked if the program could be adapted as needs arose, which Sampey replied was doable.

Pelican Waste currently handles the trash service with a Mississippi company handling the recyclables, she added.

“People are just abusing the system is why we need changes.” – Chandra Sampey

Council Chairman Dick Gibbs asked if the parish had penalties for illegal dumping at the recycling sites. Sampey said not now, but they are reviewing new rules that would apply after the surveillance cameras are installed at both parks.

Gibbs also inquired about curbside recycling, which Sampey said they will revisit by surveying residents on whether they want the service.

Parish Public Works Director Clayton “Snookie” Faucheux said past participation in the parish’s earlier program had been as low as 25 percent of the parish population, which lent to its end. However, he said public interest may be renewed in recycling, particularly plastics.

Chad Becnel said he felt a mix of emotions when he drove to Baton Rouge earlier this month. […]