By the time Teddy Morgan got an early release from state prison, he was making fast progress toward keeping his promise to his wife – that he’d make this up to her.

“When he went to prison, I had to take care of him and hold down the bills,” said his wife, Allison, of Destrehan. “He promised when he came home he’d take care of me and he’s living up to his word.”

Morgan was among 1,900 inmates statewide who got an early release on Nov. 1. He served nearly six years of his 15-year sentence on a conviction of possession of cocaine with intent to distribute when he was named among inmates eligible for release as part of Louisiana’s criminal justice reforms passed by the Legislature last year intended for nonviolent offenders.

Less than three months out of prison, Morgan is working two jobs.

“I couldn’t believe I was getting another chance in society,” he said. “I wanted to be with my kids more and appreciated the time with my kids and family more. My whole time in jail was thinking about what I was going to do when I get out of jail.”

On Nov. 1, Morgan was among 120 inmates in the Louisiana Department of Corrections’ Thibodaux district (which includes St. Charles Parish) who got early release from Winn Correctional Center in Winn Parish.

Morgan recalled what it was like at age 28 to enter jail to serve his 15-year sentence.

“I was thinking there’s no way I can get through this,” he said. “That’s a lot of time. I thought I’d never see my family again.”

When he was freed six years later, Morgan said he was in disbelief.

“I didn’t believe it until they let me out that night. When you in some place like that – in lockdown – you’re buried alive,” he said. “You never think you’ll get out. Once you’re there, you’re controlled.”

But, when it did happen, Morgan added, “I was crying inside. I’m free.”

Since his release, he’s remained focused on bettering his life and that of his family.

“He’s going above and beyond,” said Eva Tripkovich, Morgan’s probation officer. “He got a job within 48 hours, and two months out he had two jobs and purchased a vehicle to get back and forth. He’s doing what he needs to do.”

Morgan is showing initiative, Tripkovich added. He got these jobs on this own and “hit the ground running.”

Of the 120 inmates who were released early from the Thibodaux district, only one has returned to jail. District manager, Corey Acosta, said each released inmate leaves with 200 hours of education aimed at improving their success. 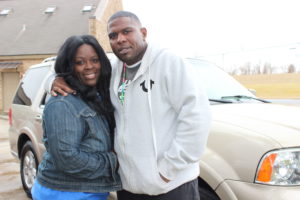 “Teddy is one of those guys trying to do what he can to do the right thing,” he said. “He had an important point of aging out of crime, but he has matured and got into a job and is taking care of his family. That’s why he’s doing so much to get things together.”

Both Tripkovich and Acosta attribute some of Morgan’s determined success to having good family support. Finding a job is another factor in their success, Acosta said, adding that’s what makes it so important that employers give inmates a second chance.

“We need to give them a job and a chance to be productive citizens,” he said.

He said in many cases that vocational training was as or more important than getting a GED for inmates because the job lends to the stability that helps keep them home.

Morgan’s wife also agreed that it’s working for her husband.

When Morgan returned home, Allison said she had his favorite food waiting on him.

“He wanted shrimp stew, and crab dip and chips,” she said. “I had cooked his special meal.”

The bad news for Destrehan: the Wildcats didn’t spend much time in the redzone in Friday night’s regular season finale against visiting Thibodaux.   […]