All Kinley Donaldson can talk about is the money coming for her recent role in the play “Waitress” held at the Saenger Theatre in New Orleans.

It’s what can happen when fame hits a Destrehan kindergartner who has found fortune from a lucky break that almost didn’t happen.

Kinley enjoyed the fame, but she has more on her mind.

“I want lots of money,” the now 6-year-old said, emphasizing the word “money.”

Her check is in the mail – literally – and a healthy one for one day’s work. All her mom would say is it’s a nice check and Kinley “also thinks she’s rich and famous.”

Her mother, Kristy, mused her darling girl has become a prima donna, who is still coming off her high of being an actor in a national Broadway tour. “Waitress” is touring the nation and holds auditions at each location for the character Lulu, which Kinley landed as one of two girls chosen for the role when it came to New Orleans. She auditioned during summer break and the play was held in June.

Although Kinley is comfortable in her new world, her mom mused, “It changed her head because she thinks she’s hot stuff.”

Kinley’s response is simply, “Mom, ‘Waitress’ is over.”

Even so, the story of her success is loaded with synchronicities.

A friend of Kristy’s saw an announcement that Lulu auditions would be held in New Orleans and encouraged her to sign up Kinley, but she wasn’t sure about this move.

“At first, I thought, she doesn’t sing and never acted before,” her mother said. “She’s in speech therapy. No one will be able to understand her and so I didn’t sign her up. I sat on it about a week.”

She changed her mind when her friend remained persistent about it and she saw Lulu had a minor role at the end of the play. She asked Kinley if she could do it and she agreed.

Kristy contacted casting and was told it was full – no more slots. They kept her name in case of cancellations.

The day before auditions, they got a phone call.

The youngster competed with 30 girls for the part, and her mother said her daughter is so tiny that she missed the height requirement.

Even so, she said, Kristy nailed the audition.

Just a few hours later, they got an email – her little girl had the part.

“I screamed and I told the girls,” Kristy said of the news. “We all couldn’t sleep.” 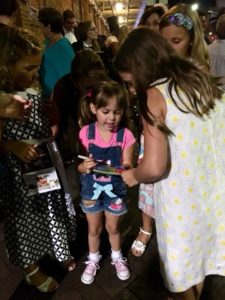 They couldn’t tell anyone for weeks until the announcement was made at the Saenger. Now, Kinley was in the news.

“It just fell in her lap,” Kristy said. “It was almost like it was meant to be. We only got it by chance when people cancelled.”

Kinley had to come up with a headshot and resume’, which her mother provided and included details like she loves playing Minecraft.

The two girls skipped one day of school to fill the role and were given a room at Herod’s Casino Hotel with flowers and snacks.

“She thought she was a movie star,” Kristy said. “She got to stay in the city.”

The two were featured in the Playbill, got their own dressing room, were given a tour of the theater, gave interviews to the media and allowed just a few hours for rehearsal. She had two or three lines in the play, danced and sang a song on stage.

After her one-time performance, she got to give autographs.

Her fame is immortalized on Instagram, a move she hopes will land her more roles.

“She thinks she famous with that,” said her mother. “She had more followers than her mom.”

Her older sister, Camryn, 9, went to the River Region actor camp, too.

As for Kinley becoming an actor, she isn’t sure yet although she wants to be famous and repeated “I want lots of money.”

On Jan. 16 Jim Coleman will turn 100, and he will undoubtedly spend his morning the same way he does every other day – by sending out a devotional text to his friends. […]