As a 1986 graduate of Hahnville High School, Cedric “Ceasar” Thomas knew he was enlisting in the U.S. Army, married his high school sweetheart and then served in tours of duty that took him to the Middle East.

It seemed like yesterday when the Boutte native set his life in motion. 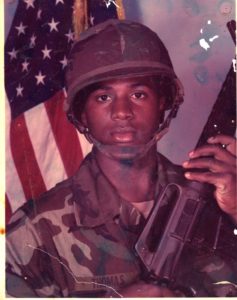 This was 32 years ago and now Thomas has maxed out on the allowable time of service and he’s entering mandatory retirement. But he doesn’t hesitate to give credit where it’s due when he reflects on his childhood in St. Charles Parish.

“I think my family and teachers are the reason I turned out the way I did … from first grade on,” he said. “My home is the reason I am who I am. I am St. Charles Parish. I am Boutte.”

In a ceremony filled with family and friends at Fort Bragg, N.C., Cmd. Sgt. Maj. Cedric (Ceasar) J. Thomas, son of Curtis and Theola Gullage of Boutte, closed out his military career of more than three decades.

Thomas joined the Army after graduating from high school and then completed his initial military training at Fort Dix, N.J.

Joining the Army was a natural move for him.

He’s seen numerous members of his family, including his brothers Eric and Larry, join this branch of the military. His son joined the Army this summer.

“The Army had this slogan, ‘Be all you can be,’ and I was watching the videos, too,” Thomas said. “You always want to be like somebody you know.”

Immediately after training, he reported to his first duty station in Bad Kreuznach, Germany.

Shortly after arriving, he married Trina Darensbourg, also a HHS Class of 1986 graduate. She is the daughter of Alvin “AV” and Ella Darensbourg of Luling. 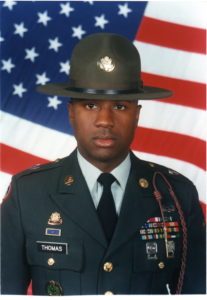 Thomas started in transportation and expanded into logistics. By 1995, he came to a turning point in his career on upward mobility in the Army or simply leaving, but a promotion kept him in the military.

Thomas also was deployed to Panama and Haiti in support of Humanitarian Relief Missions.

In 1992, their daughter, Destinie, joined them, followed by their son, Cedric Jr., two years later.

Some of his awards include: the Legion of Merit, The Bronze Star Medal, Meritorious Service Medal, Army Commendation Medal, Army Achievement Medal and numerous others.

He rose from private to highest enlisted rank, Command Sergeant Major, and has held every leadership position for his Military Occupation Specialty.

Thomas praised his wife’s dedication throughout his military career.

The couple moved more than 17 times in the past 30 years and spent over 12 years overseas. The couple plans on staying in North Carolina for about five years and then will decide if they’re retiring to Louisiana.

“I’ve still got Trina and that’s important to me,” Thomas said. “That was my constant reminder of home. Having someone who came from the same place as you kept me connected to home, and she’s still here … and she likes me.”

Thomas’ mother and father still live in Boutte, and his brother David lives in Luling and sister Terri in Paradis.

He also thanked everyone who sent cards, letters and prayers.

In addition to reflecting on where he was raised, he recounts how his life changing when he was content with his career in the military.

“If I could stay in the Army the rest of my life I would,” Thomas said. “I’m a soldier for life.”