Tony L. Waguespack was only 45 when he died suddenly from a heart attack while on a hunting trip, but Steve Dufrene decided something had to be done to remember his longtime friend and fellow outdoorsman.

Dufrene has organized the Tony Waguesback Memorial Catfish Jugline Jamboree, which he intends on holding yearly.

‘I’ve known Tony since probably the early 1990s,” Dufrene said. “He was just one of those guys you met and you were friends. After he passed away last hunting season on Jan. 20, I was thinking about the loss and wanted to make something out of a bad situation.”

That’s when it hit him to organize the jamboree in Waguespack’s memory, which will be held at Beck’s Bar on Highway 1 in Raceland. 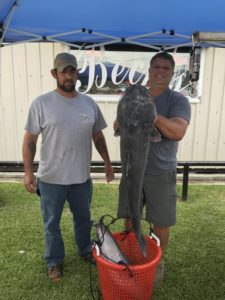 After seeing the results of this weekend’s jamboree, Dufrene said he decided to dedicate it to Waguespack and make it a yearly event.

But Dufrene decided the fishing tournament would be more than just a jamboree, but also an opportunity for his old fishing buddies to gather and remember their old Bayou Gauche friend.

“It was sad,” Dufrene said. “He was in the prime of his life and it was so sudden.”

With some reflection, he remembered a jugline jamboree that he hosted in 2014 where Waguespack and his Bayou Gauche friend, Lance Dufrene, participated in and won.

It was a moment of inspiration.

“I thought it was fitting,” Dufrene said of holding a fishing jamboree in his memory. “I felt it was something he’d approve of and it would give his friends and family something to reflect on.”

Waguespack and Dufrene never fished together as a team, but Dufrene said it was impossible to forget a friend who loved hunting and being outdoors.

“He just enjoyed all the bounty,” he said. “We were sort of cut from the same cloth.”

Waguespack was the kind of friend that Dufrene described as “timeless.”

When he came to a frog tournament that Dufrene hosted nearly five years ago, it was like they had not ever been apart.

“He never missed a beat,” Dufrene said. “He was always positive, always laughing and found the fun in everything. I never had a dull moment with him. We just found something to laugh about. After he died, it was nothing to laugh about. But this is something I could think of doing in his honor that a lot of us could participate in.”

Sisters follow in mother’s footsteps as they teach dance

When Kiley Voges speaks to her dance students, she hears her mother’s words. […]

Destrehan Plantation rolls out its own cane syrup and raw sugar, cookbook is next

A private label cane syrup and raw sugar are among the new and exclusive offerings of the Destrehan Plantation Gift Shop, and plans are now in the works for a cookbook accompaniment to the cane syrup. […]