The Elf on the Shelf has become quite the Christmas tradition.

Mason Dufour brings it to life.

The infant son of Norco Elementary School kindergarten teacher Kami Dufour can be found on Facebook each day adorned in Elf-wear, and you can never quite guess where he’ll pop up.

“I have a 3-year-old, and I see how much joy Elf on the Shelf brings him when he sees it every day when he wakes up,” Dufour said. “And it got me to thinking, people love seeing the pictures (of Mason) when I post them on Facebook … let me see if I can find an Elf on the Shelf costume.” 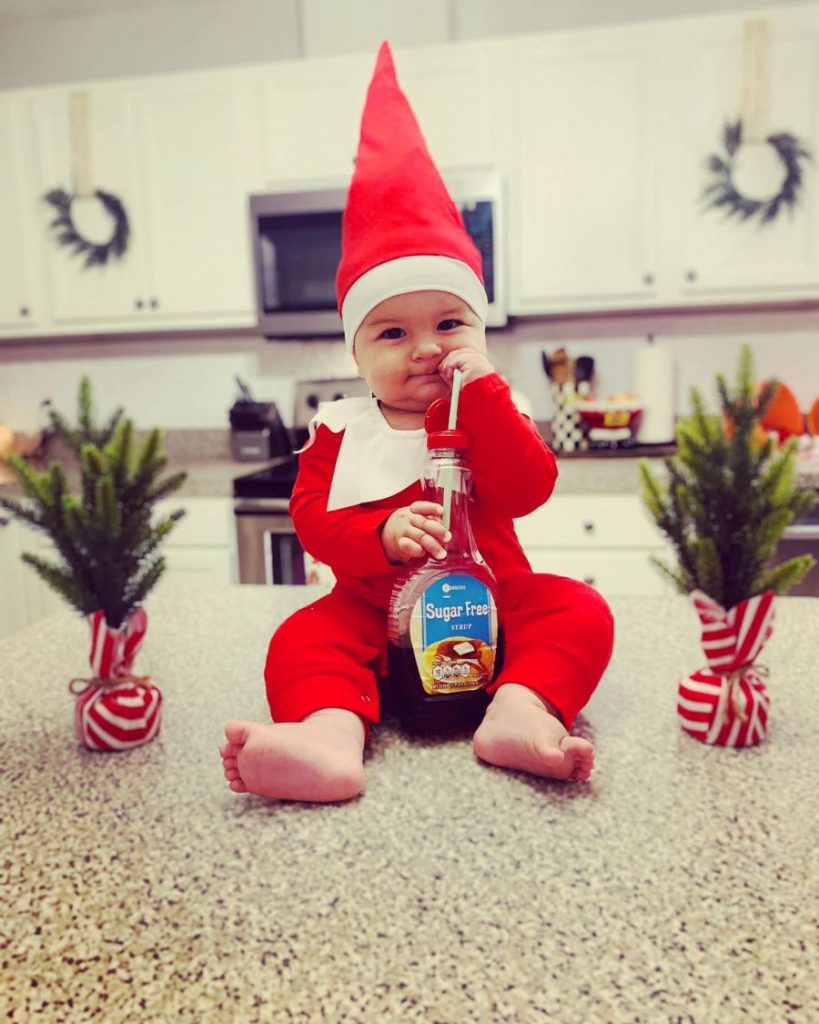 It’s been a hit among her family, friends and co-workers. When it comes to spreading holiday cheer, Mason might just be in a league of his own.

“I have friends and family who are like, ‘I never log into Facebook, but I do just to see what he’s doing today,” Dufour said. “They tell me it’s something to look forward to, and that it brings them so much joy.”

The Elf on the Shelf tradition began in 2005 with the release of – fittingly titled – The Elf on the Shelf: A Christmas Tradition, a picture book for children written by Carol Aebersold and her daughter Chanda Bell, and illustrated by Coë Steinwart. The book tells a Christmas-themed story, written in rhyme, explaining how Santa knows who is naughty and who is nice. The book was sold in a keepsake box with a small toy elf.

The toy is the key: the practice of moving the elf around the house each night for the children of the home to discover when they woke up became popular, and those who participate often find themselves devising creative spots for the elf’s next night stay. Chronicling that through photography took off as well. 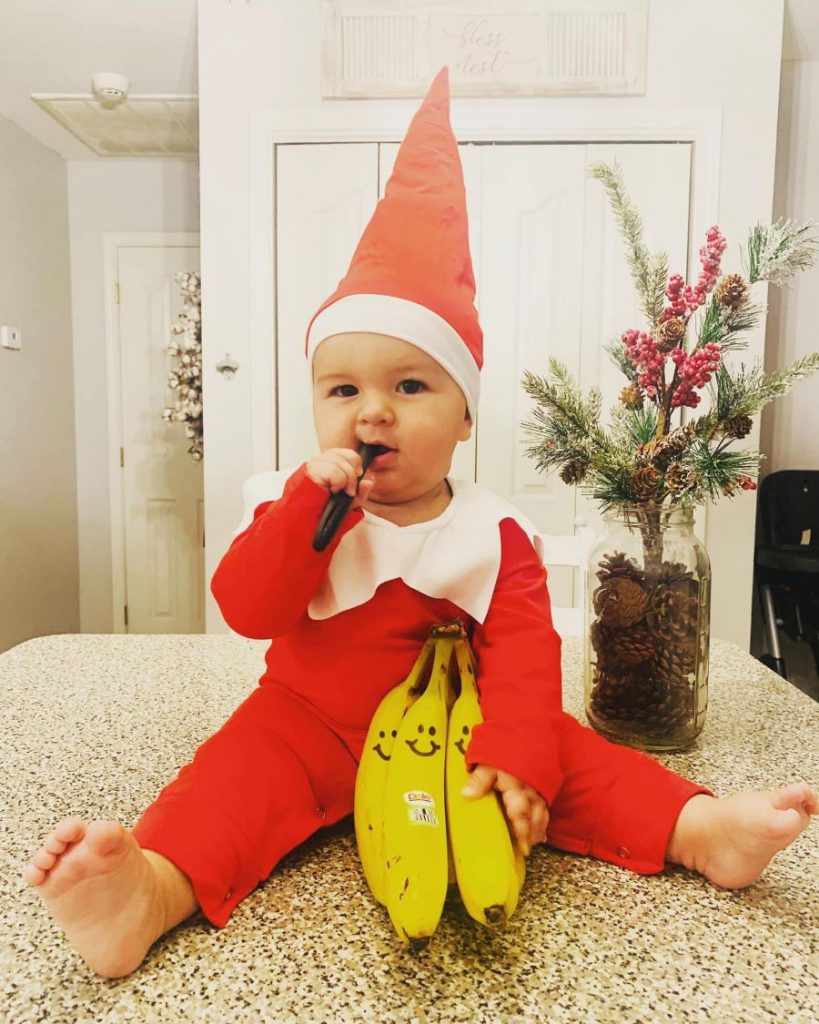 “He loves it. When I pull out the costume, he gets all excited,” Dufour said. “The stuff I have him doing, he loves playing with everything. Once in a while, some things he just isn’t having it. I try to think about what we have around the house and how we can incorporate it. Food – he loves that. That’s a winner, every time.”

Indeed, the kitchen is one of this elf’s favorite stops – he’s even made it inside the refrigerator, and into some of its contents.

“My creative side gets to come out,” Dufour said. “I’ll think of what some things I see other people doing with their little elf that I could do with him.”

When Dufour gets to school in the mornings, she gets to hear some instant reaction.

“They stop me in the hallways,” she said. “They’ll say, ‘Oh my goodness, I just saw him last night, I can’t wait to see what he’s getting into tonight.”

It’s as much of a lift for Dufour to see how much joy her baby boy is bringing to others. And it’s a welcome one. Dufour noted part of her inspiration for beginning this was born from a difficult year.

“The school year started out a little rocky, between COVID and the hurricane. People were down … as far as family goes, we’ve lost some loved ones, some close friends dear to us … when I see how much joy the elf brings my 3-year-old, I thought it would be a nice way to spread some holiday cheer.” 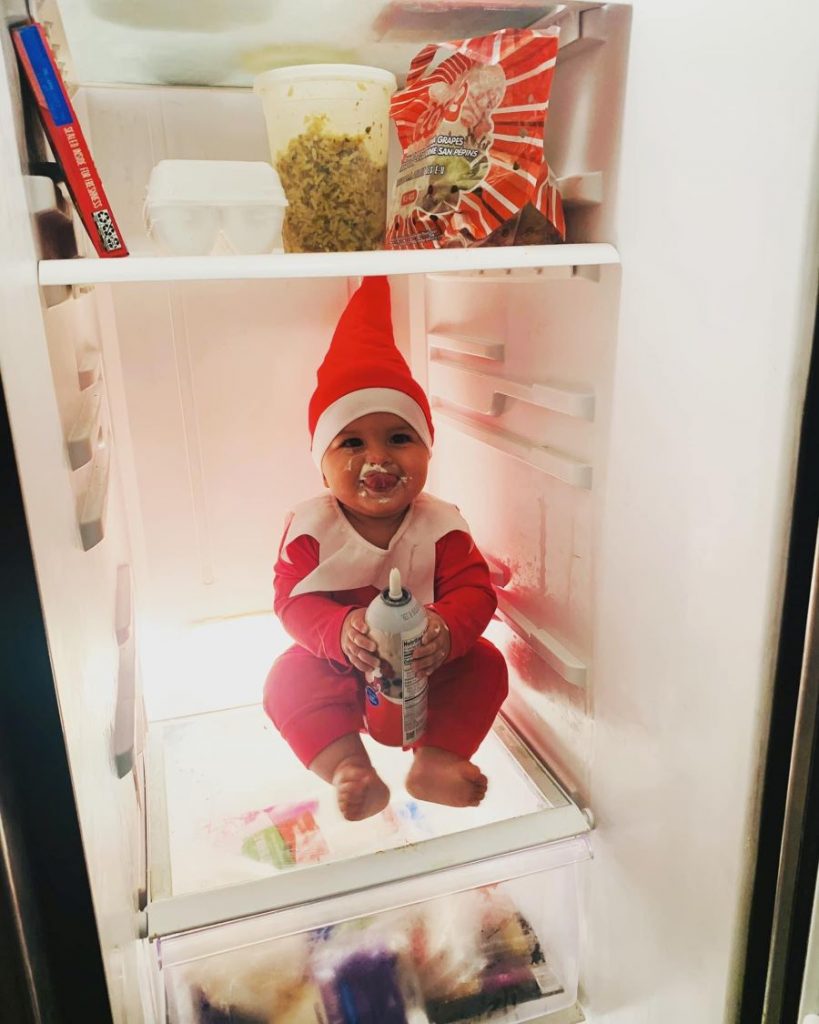 Tuesday morning delivered a sight not seen at Destrehan High School for months: buses lined up, students filing into the school’s front doors and hustling to class, teachers and administrators greeting and directing them.  […]

Homegrown singer and songwriter Will Dempsey had quite the 2021, and he’s kicking off 2022 with the release of a new original song on Jan. 21. […]