Little Wyatt was only two years old when a routine eye exam revealed a rare condition that sent him to a retina specialist in Texas.

When the Baptiste family first sought a diagnosis at LSU Medical Center, Dr. Maria Reinoso told them, “Wow. I’ve never seen this before. It’s rare,” and recommended the specialist who told them it was a coloboma, a congenital condition in which the optic nerve does not form completely causing abnormalities in the eye that can lead to retinal detachments and vision impairment.

In Wyatt’s case, both of his eyes have the condition. Colobomas also fill with fluid causing increased pressure in his eyes, but he doesn’t know the difference because he’s had it from birth. 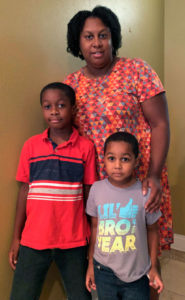 “We were out of answers,” Coleman-Baptiste said. “There was no one else here to treat him. We were at risk he could lose his sight.”

When they met Chang in July of 2016, they began making trips every six to eight weeks to Houston for treatments. They would leave at 2 a.m., meet with the doctor at 8:30 a.m. and get back on I-10 to return to their home in LaPlace. Coleman-Baptiste works at Access Health in St. Charles Parish and her son is in pre-K at Boutte Christian Academy.

Chang diagnosed Wyatt with the condition in both eyes, but they’re working on saving his sight in the right eye, which he’d lost 90 percent of his vision in at the time.

“He never complained about it,” she said. “But this is the way his vision has been all his life.”

And they wouldn’t likely know about it if it hadn’t been for the eye exam. It’s why Baptiste advises all parents to get every child’s eye sight checked.

Since November of 2017, Wyatt has had five surgeries.

Chang implanted a “bubble” of oil in the back of the nerve, which is serving as a sealant to help keep the retina in place.

By Dec. 20, it was holding. His vision had improved substantially from being nearly legally blind. In February, the oil will be removed with the hope the retina will remain attached.

“The doctor says that’s one of the biggest battles with this condition … keeping the retina attached,” Coleman-Baptiste said. “He could still lose vision if this doesn’t occur.”

Now at age 5, Coleman-Baptiste wants Wyatt to live as normal a life as possible.

“We went through a lot of different emotions with very little information and a lot of  unknowns and questions.” – Carlita Coleman-Baptiste 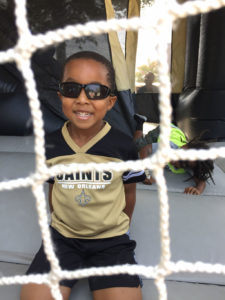 “We don’t limit Wyatt to anything,” she said. “He doesn’t complain about anything. This is just the way his eyes are and this is the way he sees, and this is what he knows.”

She remains committed to educating others about what a difference the eye exam has made for her son.

“We went through a lot of different emotions with very little information and a lot of unknowns and questions,” she said. “The hurting thing that I felt was … if he was going to lose his sight… I was so afraid. I thank God for our immediate family and church family. They prayed with us and supported us.”

They accompanied her on trips to Houston and help raise funds to afford Wyatt’s medical care. One of them was a “Wy’s Eyes” T-shirt fundraiser. There is also a GoFundMe account set up to help cover medical expenses.

Dat Dads’ Club of Luling is holding a fishing fundraiser for Wyatt and Mya Theriot of Luling in March.

“God has blessed him with beautiful, unhealthy eyes,” Coleman-Baptiste said. “People comment on his beautiful eyes, but this is the most unhealthy thing on his body.”

Work on Luling’s Lakewood Drive slated to begin this year