Before the game, the celebration included an alumni cook-off, a motorcade featuring the homecoming court wearing suits and riding in shiny convertibles, and the crowning of the homecoming queen took place at halftime. The SCC Homecoming Court members were chosen by a vote of the student body. 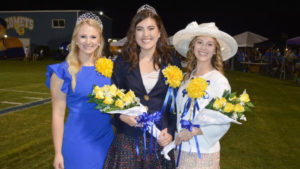 Senior Bailey Bourgeois, daughter of Curt and Tiffanie Bourgeois, was crowned queen at halftime. She has been a three-year member of the Art Club and the swim team. Bailey is also in Student Council, and on the Pep Rally Committee, tennis team, and track team.

Bailey stated, “Being crowned homecoming queen is an amazing honor. I can’t express my gratitude enough for my family and friends constantly supporting me. Thank you to my peers and the student body for giving me this great opportunity to represent the school. SCC has truly become my 2nd family. Go Comets!”

Senior Keri Clement, daughter of Jane and Darren Clement, was named as the Maid of Honor. She has been a member of the Stagehands for the past four years and is also a member of Student Council, French Club, Ambassadors, Retreat Team, and Pep Rally Committee and is a Eucharistic Minister and also captain of the Starsteppers.

The football team had a big win over Lusher for Homecoming 2018. The Annual Alumni Cook-Off was also held that night. Alumni cooks served great food from shrimp & grits to red bean gumbo. The cook-off winners this year were “The Murphy’s and whoever shows up” sponsored by Mike and Giselle Murphy. They served a delicious dish of shrimp and crab cream sauce over fried fish.

St. Charles Catholic High School Homecoming 2018 was truly a place where friends, faith, and football came together all in one night.