‘That’s what it’s all about. I run for the medal.’

When Courtney Luquet crossed the finish line at last week’s Disney Marathon in Orlando, she had just put the finishing touches on a 26-mile run — and as far as she’d run, it was probably even further from where she thought she’d ever be just a few years ago.

The Destrehan woman says she’d never considered herself a runner, or much of an athlete at all, back when she worked at Disney World from 2009 to 2011. Her godfather, a dedicated runner himself, had attempted to get her to run with him, but she would always decline. And when her roommates and co-workers at Disney World approached her about running in the 2014 Disney half-marathon to mark their five-year reunion, she had the same answer, until a second question triggered her competitive instincts.

“They asked me if I’d meet them at the finish line, and I was too competitive for that,” she said. “I got with my godfather and told him I’d run with him.”

That 13-mile half-marathon may have been the first milestone Luquet hit as a runner, but even so, the prospect of running a full 26 miles (the Disney run is 26.2 miles, to be exact) wasn’t even on her radar at that time. But after a friend of hers brought the subject up, and Luquet learned 2018’s run would mark the 25th anniversary celebration of the event, she decided she’d get herself ready to take on the task.

She began training in May, and though injury cut into her preparation time — specifically, a shoulder injury had to be tended to before she could get back on course — she built up her endurance over time.

“I’d go two days a week, on a treadmill before work,” Luquet said. “Then each Saturday I’d steadily increase my mileage. I didn’t want to fall short at all.”

But even given her training, completing the marathon itself would still require she hit a peak she hadn’t yet approached. Prior to the start of the Disney run, her longest run was 20 miles. And compounding matters, the temperature on the day of the race didn’t help, a chilly range of 30 to 40 degrees. 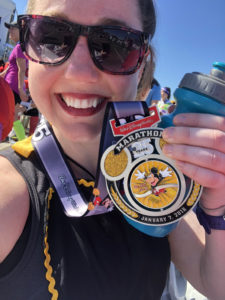 “I’d never run that far,” she said. “I knew running at Disney would be fun, going through the parks, but you only go through the parks for maybe seven of the 26 miles, then you’re on the Disney interstate road.”

But once she got out there, she hit her stride.

“Seeing everyone there in costume, the people with their signs, hearing the music … Disney puts on a great production in every w

Plus, she wasn’t going to leave without that medal.

She said seeing her family there to cheer her on added a great deal of motivation.

Part of what made completing the marathon special was that it was at Disney, where she had worked before and established great memories.

She plans to keep up her running as well, noting she considers it more of a lifestyle change than exercise. 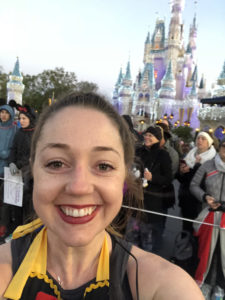 “I feel healthier and I watch what I eat more,” Luquet said. “It’s been great.”

She’s also been able to pass on that change. While one of her best friends is a runner, another is not—or at least, not yet. Luquet has recruited her to run the half-marathon with her at next year’s Disney event.

“She’s already training for it,” Luquet said. “That’s the next big one, and we’re trying to get everyone into it.”

After being stuck inside of the house for a COVID quarantine and then Hurricane Ida, Brittney Dufrene knew she had to take matters into her own hands to give her kids a sense of normalcy. […]