When Glenn Deroche got the opportunity to explain how a Social Security scammer conned him out of $15,000, he readily spoke to U.S. Sen. Susan Collins’ office to aid the investigation.

“We had a long conversation with three or four people in on the conversation and they had a lot of questions,” Deroche said. “They wanted everything.”

Collins, R-ME, said this scam has become so prevalent in the United States that they’re investigating and calling for a legal crackdown.

“As chairman of the Senate Aging Committee, protecting seniors from all forms of financial abuse is among my highest priorities,” said the senator. “One of the most persistent and growing frauds is the Social Security scam in which ruthless criminals seek to rob Americans of their hard-earned savings. We must redouble our efforts to bring these scammers to justice. My committee is investigating this scheme, and I have also requested information from the Social Security Administration, the Social Security Administration Office of the Inspector General, and the Federal Trade Commission about the steps they are taking to address this scam and urged additional action to stop these criminals who are defrauding older Americans and their families.” 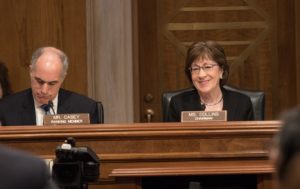 Deroche said he welcomed knowing people were trying to do something about these ruthless scammers.

He was asked to go to Washington, D.C., on Jan. 29 to testify to the Aging Committee. Although he has a conflict that day, but hopes to do it soon.

Since Deroche stepped up to warn others about what happened to him, he’s endured a little ribbing from his family and friends about being conned, some saying, “That wasn’t you, Glenn?!” which he admits smarts a little. But he endured the humor because at least another eight people told him they had received the same call and hung up, as well as Collins’ office approaching him to explain what happened.

Deroche maintained he had trouble sorting it out because Social Security will call on some matters and he ought to know because he got one in February of last year for his wife’s claim – and it was legitimate.

“Let’s talk scary,” he said. “Seven hours that sucker had me on the phone. He told me, ‘Mr. Glenn, you’re not cooperating. You’re going to jail.”

Told his identity had been stolen and he was at risk of being implicated in crimes worldwide, Deroche panicked and did what the caller told him to do. He was too mortified at the thought of losing everything to realize Social Security numbers are not typically reissued as he was told would happen if he bought $15,000 in gift cards. Even as he bought them at the Apple Store with the scammer listening on his phone left on in his pocket, two managers told him there were scams going on and to be careful.

“’This is not a scam’ was my frame of mind,” he said. “They’re saying you’re being investigated … and it felt real.”

It was so real that the scammer called Deroche back the next day, demanding another $5,000 in cards or the cops were on their way. This time, his son answered, asking the caller he believed in God and the 10 Commandments and then announced he was an FBI agent. 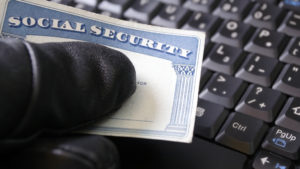 The man hung up.

“They’re relentless,” Deroche said. “Once they’ve fooled you, they will come back for even more.”

But now, he’s taking his story to Congress and even asked for suggestions on how to address the problem.

Collins’ investigators asked him what should be done to head off the scam.

Deroche suggested educating sales people at stores selling the cards about spotting someone in a potential scam and warning them not to go through the sale. He later learned this happened to a woman in Texas was in line at a store to buy thousands of dollars in gift cards. The person standing behind her convinced her this was a scam and she didn’t buy them.

He further asked that the public should be educated about how this works.

Also asked if he could address his scammer what he would say, Deroche replied, “I’ve been praying for him … that the Holy Spirit enters his heart, but this man probably doesn’t believe in God. I hope he opens his eyes one day and sees what he’s doing to people.”

Destrehan’s streak ends in second round

Fresh off a road upset in the first round of the Division I girls soccer playoffs, Destrehan looked to make it two-for-two as the No. 21 seeded Ladycats traveled to Baton Rouge to face No. 5 St. Joseph’s in round two. […]

Volunteer making a difference in Africa by cultivating sustainability

Thirteen years ago, Jarlyn Johnson noted her future goals as part of an essay assignment during her senior year of college: she hoped to help cultivate sustainable living conditions for the needy in Africa, to grow food and to serve people. […]