St. Charles Parish has made it into the movies – again.

This time, it’s in an Amazon Studios production called, “Troop Zero,” a family comedy-drama film about elementary schoolgirls recruited by a misfit girl who dreams of life in outer space and wants to be recorded on NASA’s Golden Record. She recruits a makeshift troop to infiltrate the Birdie Scouts to win a talent show.

In an online magazine called The Cinemaholic, a major question addressed was where the movie was filmed. Writer Varun Patel reports one of the flick’s charms is its “appeasing visuals.” 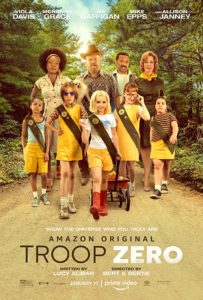 This is because they’re mostly in Louisiana, although the story is based in rural 1977 Georgia.

Most of the movie was filmed in Fairview-Riverside State Park in Madisonville, but not all of it.

“Moreover, filming for ‘Troop Zero’ was also carried out in the Luling region of St. Charles Parish in Louisiana. With highly-rated public schools, relatively lower population density and tons of open places, Luling has a rural feel to it which adds to the movie’s visual style. It makes it look like the movie’s characters belong to a small town and their adventure becomes even more grand because of that,” according to Patel.

Amazon Prime Video members can watch the movie now on the streaming service.

The film is equally rich in actors with Viola Davis, Jim Gaffigan, Allison Janney and McKenna Grace, who plays the main character.

The movie hails, “Show the universe who you really are.”

Bert & Bertie directed the film from a screenplay by “Beasts of the Southern Wild” co-writer Lucy Alibar and inspired by Alibar’s 2010 play “Christmas and Jubilee Behold The Meteor Shower.”

Amazon Studios award-winning productions have included “The Marvelous Mrs. Maisel,” “Manchester by the Sea” and “Cold War.” The Amazon subsidiary specializes in television and film production.

Troop Zero is the latest addition to Amazon’s lineup, which Amazon Studios head Jennifer Salke says is customer driven in service and content in an increasingly competitive streaming video market.

Local woman searches for answers after her cat is shot

Brandi Abate’s cat Remy was only gone for only an hour and a half Monday morning before he returned to his St. Rose home bleeding profusely from his face and in obvious pain. […]