When Deante Armstrong found himself with extra time on his hands because of the coronavirus pandemic, he used that time – and his hands – to create something extraordinary.

Armstrong, a St. Rose resident and art teacher at Fifth Ward Elementary in Reserve, decided to act upon his idea of creating custom picnic tables for children when the pandemic closed the doors to his job.

“It surprised me with how much it took off … I didn’t expect it to be that big,” he said. “Facebook was the first place I posted it and it just blew up.”

The picnic tables have been a huge hit for Armstrong – his initial Facebook post that featured four tables has been shared over 12,000 times. He said he has a friend who is building the tables, and after he is painting and customizing them for each customer. The first table he painted was Minnie Mouse-themed for his 3-year-old daughter Dekota. 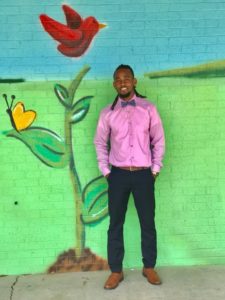 “I hope Dekota notices my drive and passion for art,” he said. “Also, that no matter what the world throws at you, you can do it … if you want something, go after it.”

Armstrong is no stranger to the artistic process. He became interested in art when he was a student at Albert Cammon Middle School, and in 8th grade he was accepted into the parish’s talented art program.

“Once I got into talented art my art teacher at Destrehan, Robert Fisher, became like a father figure to me and pushed me to the limit with different things,” Armstrong said, adding he hadn’t even painted until he was in 9th grade.

Self taught in many artistic processes and mediums, such as air brushing, Armstrong said he has invested almost $20,000 into renovating a FEMA trailer that he uses to host sip and paint parties, karaoke, slime parties and fundraisers for schools. Because of the pandemic he’s had to shut down party operations, which has given him even more time to create the tables.

“To me art is basically a way to escape what I’m dealing with,” he said. “I lose myself within my art.”

When his grandmother Laura Mae Armstrong, who raised him, passed away in 2013, Armstrong said he used art as an outlet to cope and heal. 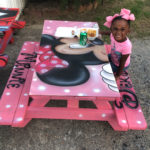 “I wasn’t verbal about it,” he said. “With my students I let them know that even when nobody knows what you’re dealing with you can find an escape in art … I want to inspire kids that they can become whatever they want to be.”

Armstrong said because of his passion and love for kids he felt like he was destined to become an art teacher.

“I think my grandmother would be extremely proud of me,” he said. “I was really just getting into my art right before she passed … at her funeral I made a promise to her that I was going to be a better man from that day forward and that I was going to try and do my best … now I’m a certified art teacher … I would hope she loves the fact that I made a way for myself and my daughter.”

The goal of his teaching career, Armstrong said, is to be a role model.

“Being able to be to them what my art teacher was to me – a role model, a genuine person, and to some a father figure … that’s my goal,” he said.

Armstrong has at least one person in his corner.

“I knew Deante was going to be a great artist the first day he walked into my classroom,” Fisher said. “He was like a sponge … he soaked up everything I tried to share that first day … I’m not surprised he is doing great things.”

For more information on Armstrong and his creations, visit www.dartshop.online, find him on Facebook as Deante Arts or search for him on Instagram @arts_deante.

Erica Randolph remembers the days when referees would shake the hands of her fellow coaches prior to basketball games, but stop short of her. Of course, she wondered why. […]

A dominant third inning performance by Pineville’s lineup spelled the end of the season for Hahnville Wednesday, as the Lady Tigers fell 8-3 in a second round Class 5A playoff game on the road. […]

Alice Cavalier Garcia, 88, passed away on Tuesday, April 6, 2021.  Alice and her husband Jimmy were active members of First Baptist Church of Luling, LA for many years before moving to Shirley, AR.  Once […]

About Monique Roth 373 Articles
Roth has both her undergraduate and graduate degree in journalism, which she has utilized in the past as an instructor at Southeastern Louisiana University and a reporter at various newspapers and online publications. She grew up in LaPlace, where she currently resides with her husband and three daughters.
Website