Was over legal limit, texting while driving according to State Police

A Boutte woman has been arrested and charged with vehicular homicide and texting while driving as result of a January crash on I-310. 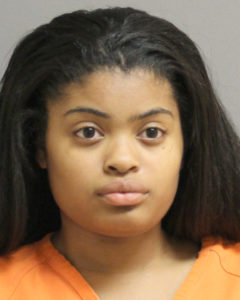 Bria Mason, 23, of 1864 Paul Mallard Road, was arrested May 15 by Louisiana State Police after an investigation into the Jan. 14 three-vehicle crash concluded. The crash resulted in the death of 21-year-old Ni-Kadek Ayu-Ratih Sinta of Gonzales, who passed away from critical injuries she suffered.

According to State Police spokeswoman Melissa Matey, Mason was found to be over the legal limit of alcohol, leading to the vehicular homicide charge. Mason was also charged with reckless operation of a vehicle.

The initial investigation by state police indicated Mason was driving her 2008 Chevrolet Impala north on I-310 when the vehicle veered to the left and struck the left rear of a 2012 Nissan Altima. The Altima was driven by Eryawan Bagus, 25, of Hammond and Sinta was a passenger in the vehicle.

The Altima rotated counter clockwise and came to rest across the right lane of I-310 with its passenger side facing on-coming traffic. It was then struck on the passenger side by a 2015 Ford Focus driven by Allison Benoit, 22, of Houma. Mason, Bagus and Benoit were treated at local area hospitals with minor to moderate injuries.

Mason was arrested after the conclusion of the crash investigation. Impairment was not initially suspected as a factor in the accident.

Unlimited samples of gumbo and pastalaya cooked by local teams were served up this month when the Dat Dads’ Club of Luling held Gradoux on the Bayou. […]

There was disappointment in the voice of Milton Cambre, and also a tinge of understandable anger. […]

After her doctor strongly suggested she find a living kidney donor, Sharon Robert had a simple response. […]