Had earlier been charged with attempted murder

The Destrehan man charged in the November shooting death of a local rapper had prior charges that included attempted murder of the man convicted of killing a Destrehan High School student.

Jakorey Williams, 20, of 287 Meadows Drive, was arrested last Tuesday and charged with second-degree murder in connection with the shooting death of Anthony “TC” Cole, a St. Charles Parish native.

Cole was found dead from multiple gunshot wounds to the head and neck on Meadows Drive, according to the St. Charles Parish Sheriff’s Office. 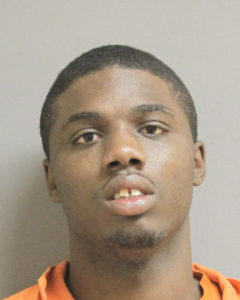 But court records also show Williams was earlier charged with the attempted second-degree murder of Javon Wells, also of New Sarpy, in January of 2016. In a taped statement to police, Williams admitted to being in the same area as Wells at the time of the incident but denied involvement.

According to police reports, Williams was accused of shooting an unnamed male on Meadows Drive on New Year’s Day in January of last year. He allegedly used a shotgun to shoot him after a dispute between the two.

The man was apparently Wells, who was later found guilty of the brutal slaying of 18-year-old Kendall Williams. Witnesses reported Wells simply walked over to the student and shot him point blank in the head. Wells will be sentenced on July 11.

The case against Jakorey Williams involving Wells was dismissed on Aug. 30 of last year, but less than a year later Williams is charged with second-degree murder and felony possession of a stolen firearm in connection with Cole’s death.

DNA connected Williams to the handgun believed used in the murder, according to the arrest report. The weapon was recovered from the murder scene at 217 Meadows Drive where “Williams was seen exiting a short time after the shots were reported to be fired.”

The handgun had been purchased at an Army base at Fort Campbell, according to an ATF trace. It was apparently stolen from the owner’s residence in Kentucky in April of 2017, according to court records.

By Jan. 29, Williams was located by the Tennessee State University police in Nashville, where he denied possession of the handgun and involvement in the homicide.

As of press time, Williams was being held on $750,000 bond at Nelson Coleman Correctional Facility in Killona.

St. Charles Parish and the United Way of St. Charles have teamed up to collect supply donations for victims of Hurricane Laura. […]

With family living in the Lake Charles area, Emily Gautreaux quickly heard a firsthand account of the damage wrought there by Hurricane Laura. […]

The sights, sounds and tastes of fall will be different in St. Charles Parish this year as two of the most widely anticipated annual events have been cancelled due to the coronavirus pandemic. […]