From a distance, Bella runs and leaps playfully around her mother who watches cautiously to ensure her filly is safe in the training pen in LaPlace.

They are Paso Finos, a stately breed of horse native to Spain prized for their “paso fino” or fine step. Bella’s mother was informally named after the character Sansa Stark from the TV show, Game of Thrones, who was abused but becomes a queen. This is the fate desired for this enduring mare who was rescued in Ville Platte, La., last year.

Bella was there, too, but she knows nothing of the hardships endured by her mother who was among a herd of neglected horses left in a pasture with only grass left to eat for nearly five years.

Sansa was so emaciated that they thought the colt was about to be born any day, but it actually took weeks more for the birth, according to farm owner Anita Hefler, who helped rescued them.

But life improved dramatically for them all in the care of Hefler and her husband, Stephen, who found homes for most of the herd. Sansa will soon have one, too.

At Hefler’s 20-acre farm, Bella is among the animal babies, including kids (goats), and a calf. Her best friend is a pygmy goat named Leo who roams about freely and visits the filly.

There are a myriad of animals there, including horses, chickens, turkeys, goats, pot-bellied pigs, cows and ducks. They all have a place there and they all have a job, too.

“We’ve always had little animals here because many of our riders are small and never seen horses before,” Hefler said. “The smaller animals would introduce the riders so they’d feel more comfortable around the horses.” 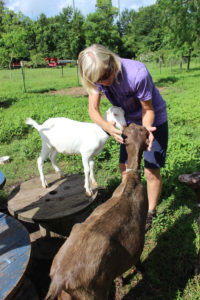 Music, a 43-year-old horse who also roams freely around the farm, is retired. But Hefler said she still likes to greet guests and lets children groom her so she still works as an ambassador – and people love it.

“When we retire our horses, we do not send them away,” she said.

Bella, who was named after one of the child riders who died in December, is likely just beginning her career in therapy.

She will soon go to a trainer and probably return to join Hefner’s Greater New Orleans Therapeutic Riding Center, which started in St. Rose and relocated to LaPlace. The program is at the center of operations at the farm, which is a United Way of St. Charles affiliate.

“They come here and they have a second chance,” she said of the horses typically donated to the farm. “This is their new job and most of the ones I’ve had have been trained to do things and most of them seem to appreciate this opportunity.”

For Sansa and Bella, it’s a life saving one.

“La Manchas are so friendly that they’ll crawl in your lap.”

Hefler is also expanding farm operations such as selling goat milk soap and goat milk for pets, as well as plans on making goat cheese. She’s testing a lavender crop as an additive to the soap.

Overall, she hopes to develop the farm as an agri-tourism destination.

The little critters help with providing petting zoos, which are often requested, she said. Kids are often requested, and it’s a perfect fit for these goats who were bottle fed and crave attention. An area church invited the goats along with two chickens and a donkey to depict animals in biblical times. 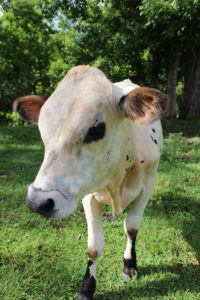 At this time, there are three babies (kids) on the farm.

In a pen nearby, there are La Manchas, Nubians, Alpine and pygmy goats all run to the gate for attention when they hear Hefler approaching.

“La Manchas are so friendly that they’ll crawl in your lap,” she mused.

“They are known for their gopher ears and a lot of people are not familiar with that breed so when they first see them they wonder if we’ve done anything to the ears, but that’s a hallmark of the breed.”

In the pasture nearby, a blond beef master mix calf ambles by surrounded by the mother and several females.

“Farming brings you back to earth,” she said. “It keeps you grounded and it’s great fun.”

But in the riding pen, where Bella and Sansa offer a redemptive scene of love and hope, farm life takes on even greater meaning.

“I made her a promise,” Hefler said looking toward Sansa. “She will never go through what she went through again.” 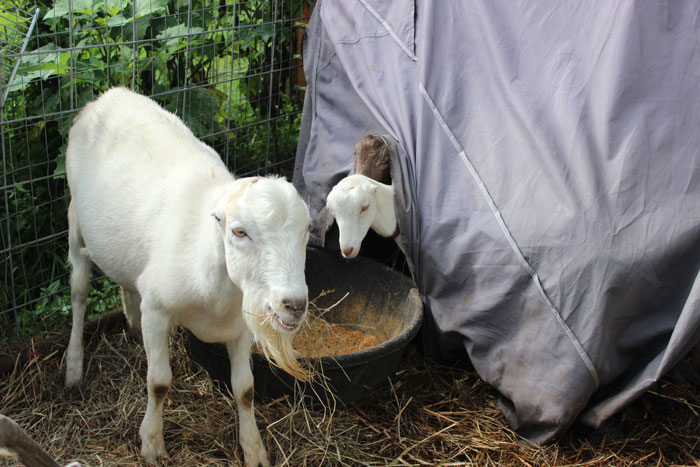 The scenes around St. Charles Parish this morning were heart-breaking and unfortunately all too familiar. […]

When members of Shell Norco’s Emergency Operations Center had the idea to repurpose flame-retardant uniforms into masks, they knew just where to turn. […]