Rye Canteen was Barrett Roberts’ dream or at least until last Friday when he closed the doors.

“It was just my personal life,” Roberts said shortly before he ended his restaurant in Luling. “I have a child now and I’ve been talking about it for a while and decided to make the move.”

Last Friday, Roberts closed the doors to a restaurant he earlier reveled in opening in November of 2015 in Luling. It was a place he could manage and serve his inventive sandwiches like his Jambalaya Po-Boy. 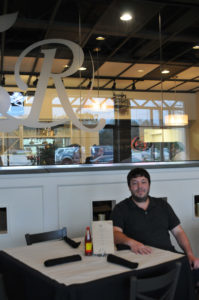 The public responded with good business, grabbing up many of his novel creations, as well as classics like the Reuben. It was Roberts’ biggest hope that people would just enjoy his food.

“I thank everybody for their support throughout the time,” he said of Rye Canteen’s time in business at 12287 Highway 90.

The restaurant’s 10 employees have found other jobs, he said.

But Roberts said the closure is about personal life pressures, particularly wanting to spend more time with his child. The decision to close was made several weeks ago in favor of returning to his background work of being an operations manager in a 9 –to-5 job.

A recent ATF violation involving an unlisted manager on his restaurant did occur, but he said that isn’t the reason for closing Rye Canteen. The agency routinely came to the business, like others, every three to four months to check licenses, liquor invoices and liquor bottles that should be at a restaurant.

Rye Canteen was the latest business at the Luling location. It followed Pierre’s Restaurant bar and Grill, as well as former Sailfish Food and Spirits.

But Roberts anticipated applying his considerable management and operations experience to his dream and first business. He and his wife, Adrienne, developed a fresh interior look with etched glass and contemporary lamp shades.

Time and time again, Brian Lumar has sharpened his leadership skills be it as an athlete, a coach, an educator or an administrator. […]

For months, Jessica Landry and husband Cory barely saw the outside of hospital walls, but now the couple – and their baby boy – are finally home. […]

Businesses, residents adjusting to new round of COVID protocols